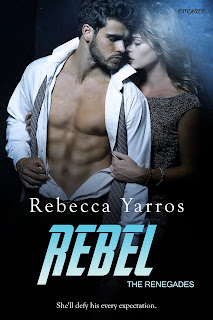 “(I)f there’s one thing I’ve learned over this last year, it’s that we have to say the things that demand to be said. Regret is its own heartbreak, and I refuse to regret a single thing about you—about us. So I’m saying it loudly. I am in love with you.”


Rebel is the much awaited story of twenty-one-year-old Penelope Carstairs, the lone female Original who's blazed the trail for other extreme sports athletes like here. But an act of betrayal that led to her becoming an unwitting victim has kept her sidelined. Over the past few months, her injury may have healed, but Penna is being held back by something she never thought she'd ever have to worry about before--fear and uncertainty. How can she continue to be the Renegade she once was if she can't even get back on her beloved Motocross bike? Maybe a BASE jump without the other Originals--with no one other than a stranger to do it with her--will help her get back on track. The fact that the stranger is the first man she's ever felt a connection with is a bonus. But when she realizes that her Cruz in Vegas is none other than Dr. Cruz Delgado, her twenty-seven-year-old Latin American History professor, Penna faces a new dilemma. Being at sea will force her to deal with her future as a Renegade as well as deal with the fact that the ship isn't big enough for her to hide from the man she's undoubtedly falling for.

Another beloved series has come to an end, but as bittersweet as the end to the Renegades series may be, Rebecca Yarros's gift for plucking at my heartstrings over and over again and then leaving me both sniffling and smiling in satisfaction has become a given ever since I first read her debut novel in 2014. Over the span of seven novels, three novellas, and one short story later, she's become one of my favorite go-to authors because of her ability to write and share stories that are worth the time you put into them--and they leave such major hangovers to boot!--with heroes that you cannot help but swoon over (because they love and respect the girls they're with and know when to take a step back and when to lend a helping hand) and heroines that don't need anyone to swoop in to rescue them because they can rescue themselves (but they sure as heck wouldn't mind the company of the guys they've fallen in love with anyway). More often than not, she's brought me to tears, so having a box of tissues within reach has become a necessity when I've got a Yarros-penned book on deck for me to fall in love with.

The Renegades series was something new for the author, but she's truly made it her own, and the fact that she's ending it with the spotlight on Penna seemed apt, especially since she was the one who was still dealing with the remnants of a certain chain of events that happened in the series starter. As much as I wish that the cover for the book had followed suit with the first two and had just Penna on the cover, I get why Cruz was there as well (marketability and all that publishing jazz). Cover aside, I loved how Penna not only confronted the reality of what her sister her done but she also learned to embrace who Penelope Carstairs was and how she didn't have to separate Cruz's Penelope, Pax's, Landon's, and Nick's Penna, and the public persona of Rebel. She came into her own and I may have liked her before, but it was difficult to not love the woman she had become here. Cruz was exactly who she needed for her to come to certain realizations about who she was. I liked that he was a bit older, had more life experience, particularly the kind that was different from hers, and that when he loved, he was all in.

There's more to this book than Penna and Cruz falling in love. This was a story of a young woman who turns twenty-two and sees herself in a new light, realizing that she didn't have to limit herself to what was expected of her by her family or friends or even the adoring yet highly critical public. This was also the story of family, what with Penna having to deal with her relationships with her parents and her younger sister and with Cruz trying to be what his own younger sister and his beloved grandmother needed. Let's not forget, this was also about friendship, and the friendship that the Originals--Wilder, Nova, Rebel, and Nitro, aka Pax, Landon, Penna, and Nick--always felt more like family, and that family grew with the inclusion of Leah, Rachel, and Cruz. Whether Nick finds love or not, you'll only find out by reading this book (though I'm still hoping against hope he gets a novella--hear me, Entangled Publishing?), but what I will say is that there's a group cameo that brought a grin on my face early on (seriously, get this book if you haven't already!). Rebel is a standalone, but I suggest you read the books in order. Five-plus stars. ♥

Read my reviews for the Renegades series: