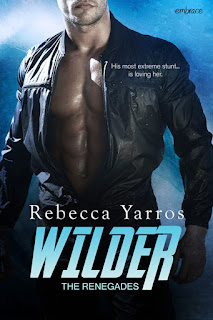 I kept my eyes on Leah, who had tears streaming from hers. "So what do you say, Firecracker?" I asked into the microphone. "Are you ready for the adventure of a lifetime? Because I know you're the only rush I need."


I irrevocably fell in love with this woman's writing a little over two years ago with Full Measures and Eyes Turned Skyward, the first two novels in her debut series, a new adult (NA) military romance collection entitled Flight & Glory, which remains one of my all-time favorites. Since then, I've devoured every single new release she's had, making her one of my absolute go-to authors. Now, you could say that my being a fangirl means I automatically love everything this author writes, but the truth of the matter is, I end up becoming more critical, what with the bar being set at vertigo-inducing heights. So now, she's got a brand new book which just happens to be the first in her latest series, The Renegades, which has an NA adventure romance feel. Did Wilder soar high or did it fall short?

Damn, but how Rebecca Yarros never ceases to amaze the heck out of me. Wilder introduced readers to the members of a group of extreme athletes that call themselves the Renegades, led by the Originals--Wilder, Nova, Rebel, and the injured Nitro. Book one focuses on Paxton Wilder, the leader of the group and whose father is bankrolling the Renegades' latest project, a documentary film that showcases the group's latest and greatest endeavors. This production comes with strings attached--strings connected to his academic performance as a college senior--but then it's Paxton's father who is the one pulling said strings. In order for him to maintain his grades, a tutor is brought in and Leah Baxter, a junior who proves to be a firecracker that sets Paxton's world right.

Paxton may come off as a rambler--a restless, aimless soul constantly on the look out for something to push him farther and further as an extreme athlete--but the man has purpose and he does have direction. He gives all of his himself in anything and everything he does and his love and loyalty to those closest to him combined with the way he's described physically in the book makes him yet another book boyfriend worth wishing for, lusting over, and falling in love with. I was a fan of the X Games (with Summer winning slightly over Winter) and putting into written words the stunts that Pax and the rest of the Renegades engaged in made it clear that Rebecca Yarros put in the time and new what she was writing about. No skimming over, no dumbing down. Her words made it easy to picture everything in my head, and I'm not just talking about the stunts but the beautiful locations they visited too.

I love both sides to Paxton Wilder. He was Wilder the showman with his fans and followers, but he when he was with those who knew him best and with Leah, he was Paxton. However, while he may have been the far more adventurous one between him and Leah, it was Leah who became his game changer. She saw past the persona and celebrity and loved the man Paxton was, is, and pushes to be. He, in turn, opened her eyes and heart to pushing beyond her own boundaries, to being courageous and willing to take risks, promising to be there, not just to catch her when she falls but to hold her hand as they jump together. With the romance, adventure, and suspense perfectly balanced, Wilder easily shifted from one of my most anticipated reads to one of my favorites for 2016. I know Landon and Penna will get their stories told, but I do hope Nick's does as well. Wilder receives five-plus stars. ♥