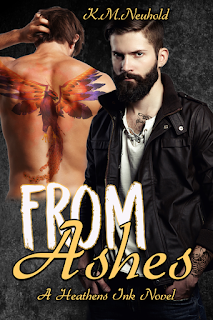 From Ashes is the third and latest release in the M/M contemporary romance series from K.M. Neuhold entitled Heathens Ink and it finally turns the spotlight on the tattoo studio's owner, twenty-eight-year-old Adam Truman. It's been eight years since Adam's younger brother Johnny took his own life and the guilty feeling that he could have done more continues to weight upon him. He's been keeping a secret for sixteen years, and it's a secret that he's kept even from his best friend, the same man who loved and still mourns Johnny. Adam deals with the guilt by trying to help those who were like his brother, so when he comes across a message online that sounds suicidal, he steps in. Using his username of Inked, Adam forges a kinship with a guy named Phoenix. From unfunny jokes to words of encouragement, Adam proves to be Phoenix's one and only pillar of support. But then Phoenix disappears, and Adam worries. A year later, a twenty-two-year-old bearing burn scars named Lennox Dalton steps through Heathens Ink's door. There's something about Nox that calls to Adam, but is he ready to reveal his secret?

The first part of this novel takes place at the same time as the events in the first two books, Rescue Me and Going Commando. If you've read those books, you'll recall that Adam was doing a lot of typing into and staring at his phone, and voila! Mystery solved. The secret he's keeping from everyone else in the book is pretty easy to figure out, and while I do understand what motivated him to not say anything for as long as he did, you would think that Adam was smart enough to know that the longer you keep mum, the worse it's going to get when the secret is finally out in the open. I felt for his best friend, Gage Vaus, because Adam's keeping a secret for that long equated to deception, regardless of the motivation. Other than my frustration regarding Adam's handling of his secret, I loved this third Heathen's Ink book. It was paced well and it had just enough angst to make me a happy angst addict. This also made me want Gage to find some peace and happiness (Shattered Pieces can't come soon enough!), and I have a guess about what awaits the other single Heathen's Ink peeps. 4.5 stars go to From Ashes. ♥

Read my reviews for the Heathens Ink series:

Purchase From Ashes on Amazon.