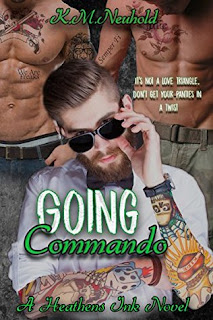 If you're familiar with my reviews, you know that I'm often wary when it comes to polyamorous stories, simply because my cynical head doesn't always the accept the whole all-three-parties-are-equally-in-love-with-one-another thing. So, while I loved the Heathens Ink series starter, Rescue Me, I confess that I went into Going Commando with a hint of apprehension. One part of the threesome involved the friends-to-lovers trope, which is a favorite of mine, and with the little comments the Heathens Ink gang made in the first book, I wanted to see if best friends Nash Williams and Royal King were going to get together--that is, if Nash could finally clue in to Royal's feelings for him. The addition of Zade, whose last name I don't recall being mentioned in either of the books, may be seen as a complication, but what it turned out to be was the tipping point of sorts that pushed Nash to open his eyes and ask himself certain questions about his own sexuality. Having Nash see him as someone more than a friend is a good thing, but with Zade now a part of his life, how will Royal handle his feelings for the men he loves?

Okay, I liked Royal with Zade; and I liked Royal with Nash. Heck, I liked Nash with Zade! The three of them together made for quite muy caliente escapades. But here's the thing--my traitorous mind still couldn't wrap itself around the idea that Royal loved Zade as much as he's always loved Nash. Maybe it was because there were still moments where he still pined for his best friend. I did, however, like that both Zade and Nash acknowledged the need for them to establish their own relationship as a twosome. There was no doubting that they were hot for each other physically, but emotions wreak a different kind of havoc, so kudos to the author for having those two working on their connection apart from what they shared with Royal. So yeah, I still found myself hesitating with this threesome, but that doesn't mean that I didn't like the story or believed that their feelings were genuine. It was just more about the idea of all things being equal. My favorite thing, however, was the appearance of the sibling Royal never knew about. It was the most moving part of Going Commando, which gets four stars out of five stars. ♥