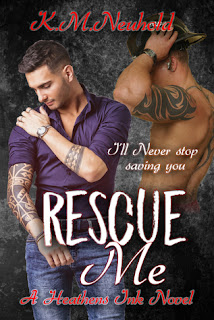 Rescue Me is the first in author K.M. Neuhold's Heathens Ink series, which is about the not-all-that straight group of tattoo artists belonging to the eponymous tattoo studio. This series starter was my introduction to K.M. Neuhold's writing, and it was a good one, not only because of Thane and Madden's story, but also because of, goodness me, the rest of the Heathens Ink crew. This was an intriguing bunch of personalities, and it was obvious that each one had a story to tell. However, while the bits and pieces about everyone else had me curious--especially Adam Truman and Royal King, Madden's mentor and boss and one of Madden's closest friends, respectively, because they were such important peripheral characters in Madden's life story and that of his love story with Thane--but the spotlight truly was on the couple of the hour, and they were endearing and entertaining.

Book one is about twenty-three-year-old Madden Brody and twenty-nine-year-old Thane Grayson, who meet in a crowded gay club and have what looks like a guaranteed hook-up. Their lives, however, are forever changed when a gunman enters and begins shooting, with Madden being shot several times. He's rescued by Thane, and from then on, their lives become intertwined. Madden has to deal with his injuries, particularly the one that may affect his future as a tattoo artist. He's riddled with nightmares and while sleep evades him, the pain doesn't. He could very well take the pain medication prescribed to him, but then Madden also has issues when it comes drug addiction. The more desperate he gets to be rid of everything that still haunts him from that night, the more tempting it becomes to give in to the addiction. Thane is ready to save him, but can he save Madden from himself?

There's quite a bit of angst in the story, though more of on Madden's side than Thane's. Madden is an addict with Oxycodone as his drug of choice and has been clean for the four years he's worked at Heathens Ink and was kicked out by his parents when he came out to them. On the other hand, Thane is in the closet and his coming out was certainly one of the more memorable ones I've come across. With Madden's PTSD and Thane's hero complex, you'd think they were a match made in heaven, but see, that's where the twist comes in because that combination proves to be a very complicated one. But even with all those complications, I loved Madden and Thane together, especially because they did have to go through more hurdles than most to realize that they didn't just belong but that they deserved each other. This was a definite winner in my eyes, and that's why Rescue Me garners 4.5 stars. ♥

Purchase Rescue Me on Amazon.