Review: The Beauty of Us by Kristen Proby (Fusion #4) 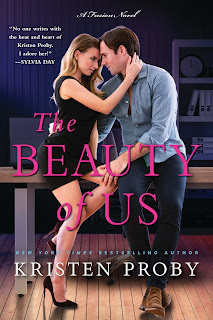 Note: This ARC was provided by William Morrow Paperbacks via Edelweiss in exchange for an honest review.


There’s a lump in my chest the size of a grapefruit at her words. I want to ask her to say it again, I want to jump and whoop and freak the fuck out.

Instead, I kiss her temple and breathe her in.

There she goes! There she goes again! (Yep, I'm totally thinking of the "There She Goes" song--Sixpence None the Richer remake, of course!) Kristen Proby has solidified Fusion as my favorite series of hers to date with the release of book numero quatro, The Beauty of Us. This was a fun, flirty, and absolutely fantastic read. It was a lighthearted romance with lots of geeky goodness courtesy of thirty-seven-year-old television producer Trevor Cooper and tell-it-like-it-is tenacity of thirty-year-old Seduction's marketing and publicity guru, Riley Gibson. These two were adorable together, and the fact that readers get to experience the development of their relationship alongside them was one of my favorite things about this particular book in the series. The series starter, Listen to Me, was my all-time favorite Fusion novel, but this fourth and latest novel has quickly tied it, and I won't choose between them.

There's more to the story than what the blurb hints at. Trevor and Riley had been in communication even prior to them coming face to face with each other in a memorable meet-cute. And just like the story itself, there was so much more to these two main characters than meets the eye. If you're familiar with the series, than Riley isn't a newbie character. We've gotten hints of her personality in the first three books, but I loved getting to know her even better here. Then there's Trevor who was a geek who rocked a pair of eyeglasses to perfection. If we're talking about chemistry, these two had it in spades. They were a hoot to read about as they flirted and dated and ultimately fell in love with one another. But can there really be hope for anything more for these two when they live in two different places? They've managed to seduce one another, but is their fusion one that'll last a lifetime?

It was difficult to not be emotionally invested in Trevor and Riley's love story. From that awkward first in-person meeting to absurdly adorable way that they exchanged text messages and went out on dates and got to know each other, these two had me hooked. I oohed and aahed, and there was simply no way anything was going to distract me until they got to their expected happy ending. As always, we've got the rest of the gang to bolster the newest Fusion twosome and the women of Seduction have never failed to bring a smile to my face whenever they get together--sober or otherwise. That being said, we've now got four out of the five with the men they're meant to spend the rest of their lives with. That leaves Mia Palazzo, and let me tell you, that epilogue? Gah! It has me antsy to learn more about Mia's bombshell after she heard Camden Sawyer's name. Five-plus stars for The Beauty of Us. ♥

Purchase The Beauty of Us on Amazon | B&N | iBooks | Kobo.