Review: Close to You by Kristen Proby (Fusion #2) 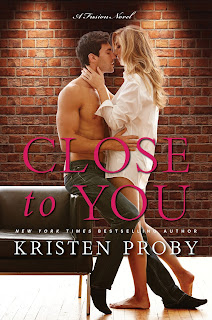 When you fall in love with a series starter, the second book becomes a highly anticipated read with major expectations to meet. Such is the case of Close to You, the second novel in the Fusion series from bestselling author Kristen Proby. I adored Listen to Me, which was released in April, and when the galley for this second book was made available on Edelweiss, I put in a request to read and review it and was thrilled when I received the email letting me know I got my approval. With that cliffhanger of an ending that served as the opening that would have Navy pilot Landon Palazzo and Seduction CFO Camille LaRue go from friends to lovers an get their shot at a happily-ever-after. These two had history, with twenty years of friendship, a long-held secret crush and one that wasn't much of a secret, and a period of distance.

After twelve years of being away from his hometown of Portland, only returning home for a brief respite once a year, Landon Palazzo is back. Forced into retirement because of an injury sustained while ejecting from his F-16, Landon is still coming to terms with having to leave his Navy career as a fighter pilot behind. He's tasked to take over the helm of the family construction business and his first project involves the expansion of Seduction, the restaurant his sister co-owns with her four best friends, one of whom happens to be Cami LaRue. He watched her grow from a kid to a beautiful teen, but now she's a gorgeous woman, one that he's had feelings for but those were feelings he couldn't pursue, what with her being so young compared to his being an adult at the time. But now, they're both adults and nothing can stop him...

Cami LaRue has loved her best friend's older brother for so long but he's never said or done anything to make her believe he feels the same way. Now that he's back from Italy, Cami's happy to have him back, but she's also finally coming to terms with the idea that nothing romantic is ever going to happen between them. But then she starts catching Landon looking at her a little longer than usual and with something in his eyes that seems akin to desire. She isn't sure what's going on and she's wary about letting him pursue her, what with his lifelong need to see the world and be away from their hometown. The Navy was his life and the last thing she wants is to serve as some sort of temporary distraction. She's fantasized about being more than Landon's sister's best friend forever, but could this be nothing more than a short-term dream?

To be fair, my expectations going into this second in a series were high after loving the first one. I liked Cami and Landon and I did feel that these two had a deeper connection that went beyond their friendship. They didn't immediately jump into a relationship and I actually appreciated that Landon had to work for her Cami's attention. Her crush on him may have been the world's worst kept secret but there should never be an assumption that they were going from friends to lovers based on that alone. I did feel, though, that there was this sudden shift in the way he looked at her and it was confusing. He claims he's had a thing for her for years but never really did anything about it and she wasn't always a teen and he wasn't always away. I don't doubt that he had feelings for her, but I think his need to be abroad trumped those feelings.

Taking out of the equation the whole years apart thing, I liked how Cami and Landon's relationship progressed. There was something genuine about it, making it feel easy, with an inevitable happy ending waiting after turning a few corners. There were moments wherein the story felt rushed, but I still enjoyed Cami and Landon's love story, especially because of how they were together in that short expanse of time in the first book. Like I said, however, earlier, I expected a great deal with this sequel, and admittedly, it fell a tad short of those expectations. That doesn't mean, though, that it isn't a worthwhile read. It is and I certainly have no regrets reading it. Is it, in my opinion, as good as Listen to Me? No. But was it a good book? Yes, it was. I did kind of wish something different for Cami's ex though. Close to You gets 4.5 stars. ♥

Listen to Me (book one) - five-plus stars - My Review

Close to You (book two) - stars - My Review (posted above)

Purchase Close to You on Amazon | B&N | Kobo.