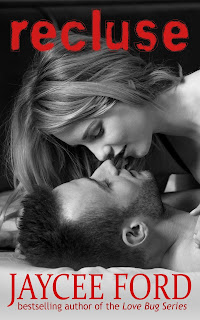 Well, I certainly wasn't expecting this book to start off the way it did! Recluse is the first full-length novel in the mystery suspense romance series from bestselling author Jaycee Ford entitled Spider. I read Huntsman in November of last year and it was the second chance love story of Michael Shuler and Grace Collin. I thought that was it for them, but surprise, surprise, they're in Recluse, albeit Mike's presence was in a different manner. You see, this series starter is about Detective Wyatt Peterman, Mike's best friend and partner, AND Grace Shuler, Mike's widow. Yep. Widow. I'm not really spoiling much if you've read the blurb because it's clear that someone died and this person's friend is in love with his dead friend's wife. So you've got Mike (dead), Wyatt (best friend and partner, and Grace (widow and mother to daughter Chloe). In the midst of it all is a murder that seems to have no motive.

So, basically, we've got Wyatt whose feelings for Grace have only deepened ever since Mike died. They share Thursdays together but in a totally platonic way. And then someone Grace knows in passing is murdered and the small and inexperienced team of detectives in their town finds itself at a loss. The clues are at a bare minimum and there doesn't seem to be a motive. Worst of all, this looks like it could be just the first for a potential serial killer. Wyatt is not only trying to figure out why the victim was killed and who did it, but he's also dealing with a new partner, and needs to decide whether or not he wants to pursue Grace romantically. There isn't just Grace to take into consideration, but eleven-year-old Chloe seems to be the one who knows exactly what she wants and isn't hesitant to let the closest adults around her know what she thinks they all should be doing with themselves either.

Fair warning: this ends in a cliffhanger, and no, the murder isn't solved in this first book. I do have a suspect in mind--subject to change as the series continues, of course--and as far as the mystery suspense part of the book was concerned, I actually didn't mind the cliffy. With the romance part, well, I get why there have been readers who weren't too thrilled about learning that there was actually a prequel that came out prior to this full-length story, but to be honest, I don't know if reading it is a necessity or not. What I will say is that I wasn't a happy camper about the turn of events from Huntsman to the beginning of Recluse. It was like we got what we thought was a happily-ever-after in the novella but it turned out to be just a happy-for-now. I do wonder though if the events that led to Mike's death could be related to this potential serial killing. Hmmm... Recluse receives four stars. ♥

Read my reviews for the Spider series:

Recluse (book one) - four stars - My Review (posted above)