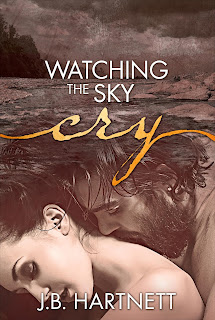 I have several of author J.B. Hartnett's books on my e-reader, but Watching the Sky is the first that I've actually read. I was looking forward to reading this, having heard numerous good things about Hartnett's writing. However, I was torn after having finished the second chance love story. It's about thirtysomething Rylie Truscott, a widow trying to move forward after having mourned the death of her beloved husband nearly three years prior to her return to her hometown. There she crosses paths with her first love and the first to ever break her heart, Quentin Miller. Rylie wants to not just live again but to love again. However, she isn't the only needing to face the ghosts of the past. Together, Rylie, Quentin, and their families will have to learn to deal with the secrets revealed and how to survive all the lies that threaten to drown them.

I love second chance romances because there's already a foundation of love that's there even though it's hidden beneath the rubble left behind by broken hearts and trust. In the case of Rylie and Quentin, both were young and in love but things ended and when the truth about the break-up was revealed, it became this thing that snowballed and went totally out of control. There was more angst than I thought necessary as well as way too many complications all smooshed together in one novel. The side stories proved to be rather distracting, although there was one particular that I would have honestly preferred to have read as a spin-off of Watching the Sky Cry because the two characters involved had a story that I feel is worth telling and delving into more, even if I did figure out the twist that surrounded these two rather early on.

I had issues with Rylie herself. She had this good marriage with her late husband Nick, and while I didn't agree with how she seemed to want to simply forget and bury everything connected with those ten years they had together after two years of mourning and having moved back to her hometown, I understood that maybe that was how she was letting go and moving forward. I wasn't, however, a fan of how she made it seem as if Nick and her marriage paled in comparison to whatever she and Quentin had as teenagers. I get first loves and that first loves can be both your last love and your forever love. I just don't like the idea of Nick having taken a back seat to Quentin all the time they were married. It was like not respecting that time together because even if it did mean something, it didn't mean as much as her time with her teen love.

So, now here I am, feeling torn. There were good things about the book but there were also not so good things about it. Separately, certain aspects of the book were highly commendable. However, put together in one package, it became a case of too many things thrown into the mix, so it's difficult to really appreciate it all. Like I mentioned earlier, I would have really preferred two important supporting characters getting their story told separately. Heck, I would have even been okay with them not getting an actual resolution here if it meant their shot at the spotlight later on. Rylie was an adequate heroine but I wasn't a fan. Thankfully, Quentin and the supporting characters were the bright spots in the book. Maybe I should have tempered all my expectations, but all things considered, Watching the Sky Cry gets 3.5 stars. ♥