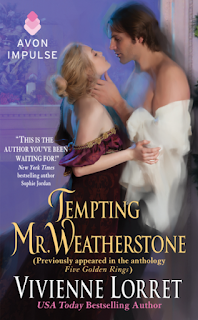 "Everything is chaos without you. You, who can never be still for a single moment. You, who constantly challenges my sanity. You, with your wry wit and the way that you know me better than I know myself. You"--he took a breath and stepped forward, using one of his handkerchiefs to wipe the tears from her face--"are the only way I can find peace in my own life."

It is absolutely not fair for Vivienne Lorret to start of series with a novella as sweet and endearing as this one. Tempting Mr. Weatherstone is a friends-to-lovers romance set in the Regency era and after I had finished reading it, the temptation to read the three full-length novels that follow this prequel novella had me adding the to my to-be-read list immediately. Penelope Alexia Rutledge and Ethan Holbrook Weatherstone have been best friends, their friendship having started a decade and a half ago. Things have always been easy between the two of them, set in a routine that has become both familiar and frustrating for Pen. At twenty-five, she's begun to grow weary of the sameness that surrounds her life. Her declarations of wanting something new and needing to seek out adventure have twenty-eight-year-old Ethan wary. He's grown fond of the familiarity that dictates their everyday lives, but while Ethan may have easily dismissed Pen's sudden want for more, he may no longer be able to ignore it or his feelings for her.

I adored Ethan and Pen and the true care and affection they had for each other. There were times I wanted to grab Ethan by his cravat and make him see what was right in front of him: his best friend who obviously had feelings that were more not limited to that of kinship. Theirs was a case of familiarity breeding a craving for the inevitable to finally happen. They were so attuned to one another, but Pen's desire to break free from the mundane caught Ethan off-guard and he clearly didn't handle it as well as he should have, though I think it had a lot more to do with the unspoken fear of losing her. This novella works quite well as a standalone, mainly because the cast of characters was limited and there was no one that I really took note of as possibly being part of the series. My curiosity with regards to Wallflower Wedding has more to do with having experienced the author's writing more than once and walking away from each one impressed. Tempting Mr. Weatherstone has me giving in to temptation for so much more. Five-plus stars. ♥