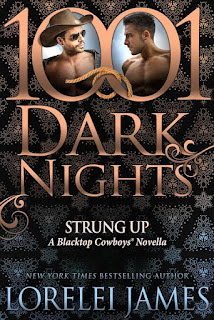 I flattened my palms by his head, keeping my body in a pushup position over his as I brushed my lips over the divot in his chin. " I want you feelin' the friction from the denim scraping the inside of your thighs as I'm grinding on you." My lips traveled up to his ear. "I want you to hear the buckle on my belt clanking as I'm moving above you." I sank my teeth into his earlobe and he arched up. "I want you to remember this. I don't want to be another anonymous quickie fuck, Breck."

I make no secret about my being an M/M romance junkie, so I've always got my eye out for a story that'll catch me eye. When I saw that a novella up for review had two cowboys as its main characters, I jumped on it, even though it happens to be part of an ongoing series. I have a thing about reading books in a series in order, but this was one of the rare occasions that I set that rule aside and I'm so glad I did. Though on a side note, the Blacktop Cowboys series was already on my to-be-read list even prior to me reading this novella. It's now been bumped up on my list, not only because of how much I loved the Lorelei James's ability to make me fall in love with both Creston Grant and Breck Christianson but because I've got the advanced reader copy of the next novel in the series ready and waiting for me to read it. Oh, and have I mentioned that Strung Up is my very first Lorelei James read? Embarrassing, I know. But what an introduction to her writing this was, and I took a peek at the upcoming novel and it does look like a keeper!

Strung Up is the third novella but tenth overall release in bestselling author Lorelei James's Blacktop Cowboys series. This is the story of two men who spent one week together four years ago but went their separate ways, leading very separate and distant lives. Twenty-eight-year-old Creston Grant had two years with the man he loved and then spent the next two mourning his untimely death. He goes through the motions, helping his brother run the family-owned ranch, but not really interacting with anyone unless necessary. When he's forced to attend a gathering put together by close family friends who just happen to be his sister-in-law's parents, the last thing Cres expects is to lock eyes with the man he had that one memorable week with, former rodeo champion Breck Christianson. Both Breck and Cres have changed since their fling, but that connection--that passion--is still as strong as ever. They agree to limit their new affair to ten weeks, neither one looking for more. But what happens when feelings finally start to develop?

I read somewhere that this novella is the author's first M/M love story. Well, I certainly hope it won't be her last because she was able to capture very well the dynamics between both men inside and outside of the bedroom--or wherever they were having sex in that particular moment--without it feeling too feminized, a complaint that I've seen many M/M romance readers voice out with other books they've read. She's taken two men who have gone through significant, life-changing experiences in recent years, and when they meet again, they're both transitioning, trying to see if the new paths they're about to or are now venturing on will work out and if merging those paths together is something they can even consider later on. This novella may be part of an ongoing series, but it worked very well as a standalone. This book had love and passion and was about taking those second chances life hands us and making the most of them. I so hope Lorelei James decides to write more M/M fiction because Strung Up was a five-plus-starred gem. ♥

Purchase Strung Up on Amazon.