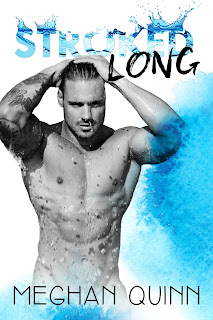 Note: This ARC was provided by WordSmith Publicity in exchange for an honest review.

This morning, waking up to her in my arms--which astounded me as I have no recollection of moving closer to her during the night--fuck it was priceless, a feeling I would never be able to get again. Her body was warm, welcoming, trusting, addicting. From the press of her ass against my stomach to the sweet smell of her hair, she doesn't make me feel afraid. She puts me at ease, makes my heart even its erratic behavior.

How can you have two books be part of the same series and yet have them feel so different and the best way possible? Swimming and silliness--courtesy of the female main character--abound, and that's to be expected, but there's such seriousness--courtesy of the male main character--yet instead of it making this feel out of place, it brought a whole new, deeper dimension to the story. When I first met Bodi Banks in Stroked, I knew that he had a tale to tell, and goodness, what an intense and heartrending one it was. Meghan Quinn mentioned in an email she sent out regarding her upcoming releases that Stroked Long wasn't going to be as funny as its predecessors and how right she was. The humor--both irreverent and witty--I've come to expect from a Meghan Quinn-penned book is still present, but Bodi's back story and the aftereffects of one particular incident in his youth play such an important role in the romance he has with Ruby Hearts, that to not give it the seriousness it deserves would have been such a disservice to him.

Bodi Banks is a powerhouse when it comes to the pool. Swimming has been his life for the past twelve years, and he's got the medals to prove that the work he's put in has reaped its rewards. But behind the winning competitive record and the gorgeous package he comes in, Bodi has a darkness within him, a darkness that he continues to struggle with. Something unspeakable happened when he was twelve and only those closest to him and those he allows within his walls--namely his older sister, her girlfriend, his coach, and his therapist--know the bleakness and anxiety running through his veins. When he's made to work with artist Ruby Hearts on a project for the Boys and Girls Club they both volunteer at, he isn't sure what to make of the quirky, off-beat young woman who happens to be good friends with his sister. Nothing about his idiosyncrasies seems to faze her, taking it all in stride with a smile. Bodi knows that Ruby doesn't deserve to be with a broken man like him, a man who has no right to wish for happy endings.

Gah! Bodi broke my heart, piece by piece, both with his life story and the love story he so wanted to have with Ruby. I seriously wanted to crawl into the pages of the ebook and give the guy a hug and let him know that he isn't alone. He and Ruby may have been opposites, but she was exactly what he needed, filling in those cracks and crevices that were left gaping for far too long. She was the light that could illuminate the darkness he was drowning in. I loved these two together, and Ruby was just such a breath of fresh air. She was weird in the best way possible, with her own set of eccentricities. I also really liked Eva and Lauren, Bodi's sister and her girlfriend and both close friends with Ruby. Reese King and Paisley Macarro, who had their own love story told in Stroked, also make appearances here, with both stories overlapping at certain points. I'm sitting here trying to think back if there was anything about Stroked Long, already a 2016 favorite top read, that I did not like, and I honestly can't come up with a single thing. Five-plus stars. ♥

Read my reviews for the Stroked series: