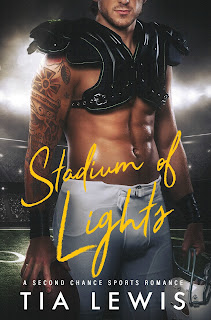 Max Anderson is a bona fide sports superstar, what with being one of the most talented quarterbacks in the NFL and one of the most sought after bachelors in the sport. He can have any woman he wants and he isn't shy about lording it over his teammates. He doesn't want a committed relationship--something he makes clear with whichever female is warming his bed. Then his teammates spot the latest addition to their team and she isn't part of the cheerleading squad. Nope, Abby Morrison is the newest physical therapist and there's no denying that Max is attracted to her... Only Abby isn't someone new in his life. She's the girl he grew up with, the one withe frizzy hair and large glasses, the one no one really noticed or paid attention. Now, Max has more than taken notice, but he can't seem to separate the Abby she was before and the gorgeous goddess that occupies his every thought today. He has no clue that she's always had feelings for him and when hurts them one time too many, can Max live without Abby permanently?

Stadium of Lights is the second novel from author Tia Lewis and it also happens to be her second sports romance, albeit a complete standalone without any connection whatsoever to her debut release. I really liked Abby and how she didn't allow herself to be belittled or made to feel as if she wasn't someone who was worthy of being given attention to. Max, on the other hand, had his good and his not-so-good moments. There were times that his treatment of Abby had me shaking my head in disbelief, thinking how blind he was to what was right there in front of him. To be honest, I wished Abby could simply move on from the guy a time or two. Thankfully, he did see the error of his ways in time for me to change my mind about him. When he wasn't being too much of a pain, he was actually sweet and caring towards Abby. This story about a rekindled friendship of childhood buddies leading to something more when they meet again as adults was told well and I can't wait to read more from the author. Stadium of Lights gets four stars. ♥

Purchase Stadium of Lights on Amazon.