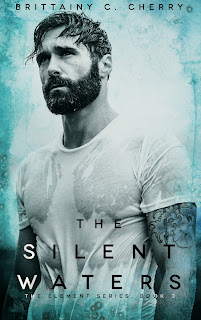 She released a breath she'd been holding, and I let go of mine.

I hadn't known you could hear someone's voice so clearly in the silent moments.

I never learn. After having gone through several tissues while reading the first two books (back to back, I might add) in the Elements series—The Air He Breathes and The Fire Between High & Lo—I should have known I was in for another round of tear-swiping, nose-sniffling, and heart-squeezing moments with the third book. Like its predecessors, The Silent Waters can be read as a standalone, having no ties to the stories or characters before it other than the four elements theme. So, feel free to read the books out of their order or publication, but I do hope you'll read each of the three currently available titles. The time you put into them will be more than worth it because Brittainy C. Cherry has proven herself to be one hell of a gifted storyteller. This is only my third read from her and I'm already immensely impressed with what I've read so far. The Elements series is an evocative collection of stories, and as this third book has proven yet again, the author is a master in taking your heart, tearing it apart, and piecing it all back together again.

The Silent Waters is the love story of Maggie May Riley and Brooks Tyler Griffin, who meet as six-year-olds. Maggie is Brooks's best friend's new stepsister and while she is more than welcomed into her new home and family, it's Brooks's gesture of kindness that ties them and keeps them tethered, whether as children who can't quite stand each other but later share their first kiss or teenagers discovering first love together and their first true heartbreak. They remain bound to one another even after a horrific event renders Maggie literally speechless, unable to give voice to what happened in the woods, and even after Maggie pushes Brooks towards his dream of making it big along with his best friends that make up their band. She has stayed behind, moored by the trauma that continues to dictate her life, while he has floated from one place to another, sharing his music with the world. As their lives change, one thing has always stayed the same—their love—but will that be enough for Maggie and Brooks to weather storms and keep them anchored to each other, or will they end up drifting further away and drowning in deafening silence?

Maggie and Brooks's story could have gone in a myriad of different ways, and yet the author weaved together a tale that was all their own. I honestly can't recall if I've ever read anything that followed in the exact same vein. Maybe a part or two, but not in its entirety. The main characters had a connection from the time they were six and even when things got difficult and they ventured away, they stayed connected. Brooks's love for and devotion to Maggie may seem fantastical to some, but there's an honesty and purity to it that's become a rarity in the romance novels I've read over the past few years, with eroticism and overt sexuality being at the forefront. Don't get me wrong. This book does contain sex, but even at their most passionate, these two share an intimacy that made them and their story feel even more worthy of my emotional investment. There are the anticipated complexities that make this such an engrossing read, with a twist I didn't see coming until it was nearly right there in front of me and with challenges thrown Maggie's and Brooks's ways but always, always, meeting them together. The Silent Waters shows that life may lead us in different directions, but true love, when we let it, will always lead us home. Five-plus stars. ♥

Read my reviews for the Elements series:

The Air He Breathes (book one) - five-plus stars - My Review

Purchase The Silent Waters on Amazon.