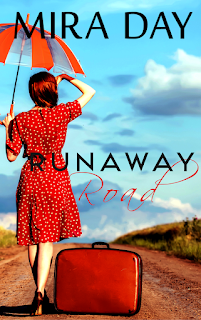 Runaway Road is a novella from author Mira Day, who is a new author to me, and sadly, this left me confused and wanting. There were timeline issues, what with the book beginning in 1990 and told from the point of view of a young woman named Sarah. The next chapter is told from the point of view of Brett, but as I moved from one chapter to the next, I found myself growing increasingly confused because everything taking place didn't seem to be in 1990 anymore. Brett is old enough to consider proposing to his then-girlfriend and Mia is living with her boyfriend. Mia then receives a phone call about Sarah, and then the next chapter has a different year: 2003. So everything that happened in between was happening when?

I don't know if this was all a formatting issue or something else, but even with this being and advanced reader copy (ARC), confusing the would-be reader is never a good thing because then it distracts from that person actually concentrating on what's happening and becoming invested in the characters and their fate. There was a lot of back and forth and while there are readers who may easily consider that the chapters without dates were set in present time and those with dates were flashbacks, not everyone does that.

There were also inconsistencies that took away from the story. One chapter is set in 2005 and yet Mia mentions Candy Crush--I'm assuming Candy Crush Saga--but that game wasn't released until 2012. I should know considering I've been playing the game since the year it came out. But again, this was something that was more of a distraction than anything, and maybe it was more noticeable on my end because I avidly and regularly play it. And I wasn't a fan of all the talking on the cellphone while driving. That's just...wrong.

While the idea of two people meet while on their way to Texas and decide to make it a road trip of sorts--driving separate cars and headed to different cities in the state--was intriguing, I just couldn't get into Brett and Mia's love story as much as I wished I could. We only get to know the characters on what we see on the surface, maybe dipping a toe once in a while into the deeper parts of their psyche. I would have wanted to delve further into who they were and what motivates them. There were also a couple of issues that were left unresolved. With what appeared to be a disjointed story, characters who weren't thoroughly fleshed out, and all the distractions in between, I simply can't give Runaway Road more than two stars. ♥