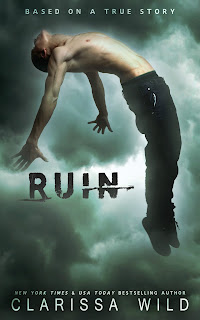 Ruin is a standalone new adult (NA) romance based on a true story and written by bestselling author Clarissa Wild. This is my first Clarissa Wild read and it was an emotional one. It's the story of two nineteen-year-olds--Maybell Fairweather and Alexander Wright. They went to the same high school but while Maybell may fairly remember Alex, he paid far more attention to her, quietly smitten by the beautiful girl who had captured his attention. When they see each other again, it's while Maybell is in the hospital, having suffered injuries in a car accident, the worst of which ended plans she may have had of dancing. Alex is there to give Maybell the support she needs as she recovers, but he carries a darkness within him, one hampered further by feelings of guilt. Will she still want him when she learns his secrets?

Maybell and Alex both have scars--hers are simply more evident because you can physically see them--and they lean on each other, forging a friendship and later falling in love. Your heart aches for what they have to go through, two essentially good kids who have their respective sets of burdens yet share a love that makes it almost natural for them to want to help ease the other's troubles. This isn't your typical sappy teen love story. There are very real issues that are tackled by the author, and while Maybell and Alex do get their happily-ever-after, getting to that point is not all that simple, highlighting the realities that are sometimes swept under the rug for the sake of focusing on the hearts and flowers stuff. The author does a highly commendable job telling a tale inspired by actual events, making it very easy to give Ruin four stars. ♥