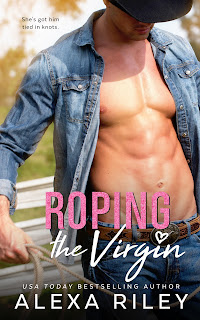 Roping the Virgin is the third novella in the Cowboys & Virgins series from bestselling author Alexa Riley and is the second one involving one of the Jennings siblings. Here we read all about Blake Jennings and how he finds his own happily-ever-after with Luciana Salazar, a new veterinarian who Blake's had his eye on ever since he first saw her in town. But Luciana has never given him the kind of attention she's given the other people he's seen her interact with, creating a dilemma for poor Blake. In his gut and in his heart, he knows she's "the one", but how can he show her they're meant to be together if he can't even get her to look his way for longer than a few seconds? The perfect opportunity comes along when Luciana starts to ask around for possible places where she can work as a vet. Blake and his siblings own their own ranches, and they've always needed an in-house vet, especially since their location is rather far from town. The question is, even if Luciana agrees to be their vet, will she want to say yes to the position of being his wife?

No one comes close to Alexa Riley when it comes to insta-love novellas. In the books I've read from the author so far--all of which I only started this year--the "insta" part doesn't necessarily always feel all that instant, with the main characters having known each other prior to the whole getting together part or there already being some sort of foundation, no matter how solid or loose, to build upon. In the case of Blake and Luciana, the two had already crossed paths, however briefly each time, whenever they were in town and Blake's been nursing a major infatuation ever since. Their romance was sweet and uncomplicated, something that I appreciate in the midst of lots of angsty, drama-filled stories that cross my e-reader. I also liked that readers get to see Ty and Mary-Jane Jennings and get some idea what stories lay ahead for the two other Jennings siblings, Trace and Dolly. I'm sure I'm not the only one who's thrilled that Alexa Riley decided to create a new series for this close-knit family. Five stars go to Roping the Virgin. ♥

Read my reviews for the Cowboys & Virgins series:

Purchase Roping the Virgin on Amazon.