Review: Pour Your Heart Out by Zoe Lee 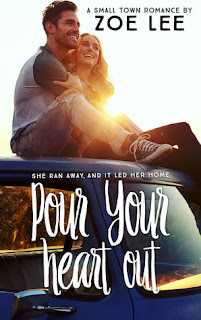 Pour Your Heart Out is the debut release from author Zoe Lee and while I went into it thinking it was a standalone, after having finished and liking it, I’m hoping that it’s a series starter. This is the story of two people who are very different and even as they try not to fall for each other end up doing so. It’s set in Maybelle County, a small town in the state of Virginia, one that’s become a tourist destination, and while tourists are a welcome source for Maybelle’s economy, not everyone, especially twenty-nine-year-old bartender and bar and restaurant owner Aden Riveau, is thrilled to make the acquaintance of a tourist, not even if she’s as gorgeous as thirty-year-old former corporate lawyer turned traveler Charlotte “Chase” Cade. Aden is quiet and sullen, his attitude towards Chase at times abrasive. Chase is inquisitive and interested in not just Maybelle but also its residents, especially the bartender who makes her want to get to know him even more. But Aden’s roots are firmly in Maybelle and he’s very much aware that Chase is just passing through. Can they risk starting something even if it’s destined to end after several days?

This was a commendable debut one that was quite charming, with a story that could have gone the way similar ones have before but kept an air of originality to it and with a cast of characters that were engaging, especially the supporting characters that I can’t help but be curious about. I admit that Aden was far more difficult to like compared to Chase, what with his treatment of her for a huge portion of the book. There was an abruptness to him that made me want to hurt him a time or two, but he did, after a good long while, win me over. He has, after all, always had a sense of family and home in Maybelle and someone like Chase, who has spent seven months traveling and exploring different countries and U.S. states, feels foreign to him. Chase’s best friend and Aden’s siblings and tight-knit circle of friends won me over completely, and like I mentioned at the beginning, I have my fingers crossed that we’ll be getting to know more about them and all their respective stories in the near future. I’m giving Pour Your Heart Out 4.5 stars. ♥

Purchase Pour Your Heart Out on Amazon.