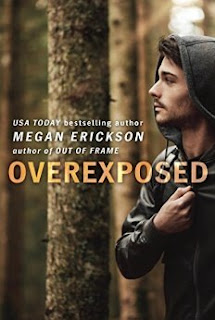 Thad's fingers flexed where he held my waist. "Levi," he groaned, as he dropped his forehead onto my shoulder. "I'm not perfect."

"I don't want you to be perfect. You fill in all of my cracks, all the place where I'm not whole. I can only hope I do the same for you."


Dear Megan Erickson, why do I allow you to take portions of my heart with every new novel you add to what is one of my all-time favorite series of any genre? Each story you share you invite us to have a front row seat to in order to experience every heart-thumping and heartbreaking moment, and every couple you introduce you entice us to fall in love with them as they fall in love with each other. I waited ever so patiently for the advanced reader copy (ARC) for Overexposed, the fourth novel in the In Focus series, to be available for InterMix Monday because I didn't want to run the risk of not being approved to read it, and my goodness, was the wait worth it. And then you capped it off with that newsletter you sent out that had two important tidbits that made this fangirl a happy camper: the bonus scene and that flicker of hope. So thank you for gifting us with Justin Akron and Landry Jacobs, Riley Sorenson and Colin Hartman, Quinn Mathers and Jay Butler, and now, Levi Grainger and Thad Connors and their unforgettable stories.

Hiking the Appalachian Trail on his own wasn't part of twenty-three-year-old Levi Grainger's plans. This was an adventure he was supposed to share with his older sister, a way to mark the end of her final deployment and the end of his contract with his reality television show. But his sister was viciously taken away from their family and now Levi is on the AT in honor of her memory. This is also his opportunity to leave behind all the overexposure from his time in the spotlight and to properly mourn his sister. Soon, however, Levi meets Thad Connors, and after a night of basking at the moon and later sharing a meal and motel room, he finds himself unexpectedly with a hiking buddy. Thad doesn't share Levi's gift for extemporaneous chatter or his ability to put others at ease with his smile. Yet somehow, they continue their hike and form a bond that is quickly becoming more. But will what they share end when they reach their final destination or could it end far sooner, when Levi learns the truth about the man he's falling for?

Both Levi and Thad are on the Appalachian Trail seeking a part of themselves that they've either lost or that they never knew existed. They're opposites and yet it's as if they carry the missing pieces to the respective puzzles they carry with them. They both know what loss is like and its a burden that weighs them down. Hiking the AT together brings them comfort and a camaraderie neither one thought they wanted but both badly needed. They seek companionship and solitude, sometimes wanting to push the other away, at other times needing to pull them closer. In the beginning, their differences appear to be setting them up for more complications, but its their similarities--the things they don't expect or think they have in common--that will force them to face their toughest challenges if a relationship is truly what they aspire to have. Levi and Thad are complex, multi-layered main characters, but at their very core, what they seek is acceptance and stability, to be seen for who they are when every other facade is stripped away.

When it comes to a series that is composed of standalone novels--whether they're loosely interconnected or not--I often find myself having a favorite, that one particular book that stands out and moves me the most, both in terms of story and characters. In the case of the In Focus series, I can honestly say that I have no favorite, and that's a rarity for me. Each one of the four books can stand on its own merits and I have loved every single journey its taken me on. I went into Overexposed with a sense of poignancy, knowing this was going to be the series ender that I both anticipated and dreaded. No one wants a series they love to end but if it has to, then you want it to surpass all your expectations and finish things on the high note it deserves and demands, so you can appreciate my excitement and apprehension. But I'm a hopelessly hopeful fangirl and I blame Megan Erickson for that. However, no matter where this road trip leads us next, reading a series as inspiring as this was a privilege. Overexposed is a five-plus-starred, 2016 favorite. ♥

Read my reviews for the In Focus series:

Trust the Focus (book one) - five-plus stars - My Review

Focus on Me (book two) - five-plus stars - My Review

Out of Frame (book three) - five-plus stars - My Review