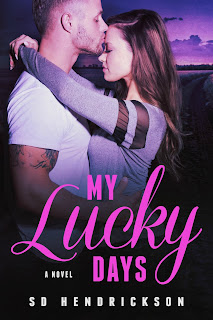 I may have her first two novels on e-reader, but SD Hendrickson's latest release, My Lucky Days, is my introduction to the author's writing. This is a second chance romance involving country singer and songwriter Landon Evans, who lives up to his nickname of Lucky when he meets and falls in love with college senior Katie Jenson. When their paths first crossed, Lucky was an aspiring musician who was clearly blessed with a mesmerizing singing voice, a talent for strumming his guitar, and a gift for writing songs that have meaning. As in love as they were with each other and as invested as they were in a future together, Katie knew that they were destined to go in different directions and she lets him go and sets him forth on a path that leads him to become the country music superstar he is eight years later. They've led separate lives, but they've never loved anyone else. As much as that love still burns bright, nearly a decade apart has changed them. Can they find a common purpose other than love to rekindle their old romance?

My Lucky Days is told through two different timelines, with more than half of the book about how Lucky and Katie met, fell in love, and broke up. Their relationship was clearly complicated, with Lucky's then promising music career on the cusp of rocketing into a stratosphere many have only dreamed of. Sometimes, love isn't enough and you can choose to let go or you can choose to stay and fight for that love. In the case of Lucky and Katie, the separation seems to have benefited both, with neither one really languishing during the eight years apart. Lucky's return in Katie's life is the one part of the story that I was iffy about. His reasoning had me raising one very skeptical eyebrow. It was as far from unromantic as you could get and turned me a bit off on Lucky and his intentions. For as long as their original love story took to be laid out, the second half felt kinda rushed. All in all, I did enjoy this four-star second chance romance, even if it did falter a tad, and it's inspired me to get a move on with the author's first two books. ♥