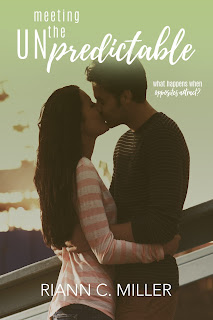 "Sometimes, when something breaks, there's not always a way to fix it."

My eyes painfully close and I'm not sure if I'm feeling agony for Lennie or me. "Is...is that what you are?" Her face turns and she looks up at me. "Broken?" My voice cracks.

Slowly, she nods her head. "No matter how hard anyone tries to fix me...I no longer have all the pieces."

How many of us have judged someone based on the way they look or solely by the first impression we have of our initial encounter with them? How many more have taken the time to really get to know someone who we may not have initially liked or thought to be nothing more than a nuisance and learned what their story was? I confess, when I first met Lennie Jennings, the female main character in author Riann C. Miller's standalone contemporary romance, Meeting the Unpredictable, I wasn't a fan. Lennie seemed impulsive and made a point of invading someone's personal space. I like having a plan, knowing when something's planned in advance, and I sure as hell don't like people, especially those I don't know, feeling all chummy. Obviously, I related more to Tyler Brooker, the male main character, than I did to Lennie, and just like Tyler, Lennie grew on me. She had a story to tell, and while the secret she was keeping from him--and the readers--can be guessed with the veiled hints and clues in the story, learning her story and that of Tyler's, as well as their respective somewhat dysfunctional families, was one highly worthwhile endeavor.

Twenty-eight-year-old Tyler Brooker likes to stick to his routines, living the life that he's created for himself over the past six years. It may seem boring to some but prefers having schedules and structure, the predictability giving him a comfort of sorts. Then he gets a knock on his door and ends up meeting the poster girl for unpredictability--Lennie Jennings. She's a whirlwind who doesn't seem to take into consideration if she's invading Tyler's time, space, and privacy, taking a bit of his sensibility with the things she says and does that don't seem to make much sense...until you get to know her and realize that she's been making sense all along. Lennie is the twenty-five-year-old sister of Tyler's neighbor and is as opposite as one can get from the type of person he is. She's the chaos to his complacency, never seeming to be able to sit still for longer than she deems necessary. There's a reason why Lennie has been on the move ever since she was eighteen and why she distances herself from her family and hesitates to form lasting relationships, but with Tyler, she's tempted to spend time with the guy next door for however long it lasts.

I figured out what was going on with Lennie early on, but I still found myself on tenterhooks, wondering how everything would play out and if this book would end with a happily-ever-after for both Lennie and Tyler or not. If Lennie were someone I had actually met in real life, I would have probably been wary of her since I prefer the calm over the crazy, but Lennie and her story are a reminder to not judge someone because we have no clue what burdens they carry and what it is they've been through. The same goes for Tyler, who has been through his own trying times. They may not seem like they have anything in common, but they actually do, especially when it comes to their families. Their relationships are damaged and they're the very reason behind both of them making the changes that they did when they did. My heart broke for both Lennie and Tyler, as it did for their families, because the bottom line was they were all missing out by not being fully present in one another's lives. Meeting the Unpredictable stirred a lot of emotions on my end--some good, other not quite--but I love a book that makes me feel and think and that's just one of the reasons why I'm giving this five-plus stars and is on my list of top 2016 favorite reads. ♥

Purchase Meeting the Unpredictable on Amazon.