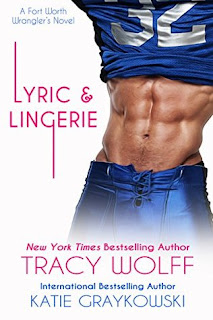 Lyric & Lingerie is the first in a new series that combines the writing talents of bestselling authors Tracy Wolff and Katie Graykowski. I suspect that the Fort Worth Wranglers series will be featuring the players and maybe other personalities involved with the fictitious professional football of the same name, but I wouldn't necessarily consider the series starter a sports romance since football was nothing more than the sport the male main character was part of as a superstar quarterback who happened to be suffering from a possible career-ending knee injury. Book one falls more under the romantic comedy genre, and it certainly had a good amount of romance thrown in with a LOT of comedy. There's a great deal of silliness that goes on, with an analytical astrophysicist unsure what to make of the star footballer who first broke her heart and the fake engagement they've got...which may not be all that fake after all, depending on who you ask. The book isn't exactly short but it was an easy, albeit often zany, read and one that I pretty much enjoyed.

On her way back to her hometown after learning of her beloved father's heart attack, Lyric Wright has one mishap after another, and that's just her getting on the actual plane. Her bad luck seems to keep going when she realizes she's seated beside the boy who took her virginity and then broke her heart when he called her "Harmony", her twin sister's name. Heath Montgomery is happy to see his childhood best friend after all these years, but the feeling doesn't seem to be mutual and he isn't exactly sure why. When he finds out that Lyric's father is in the hospital, he offers to accompany her, wanting to visit the man who took him in when his own parents virtually abandoned him. The distraction that Lyric represents keeps his mind off the injury that may end his stellar career on the football field. Add to that an engagement--that could either be a stroke of genius or a sign of insanity--and the feeling that he fell for the wrong twin and Heath is going to have to make life-changing decisions in several days, but will he be able to get Lyric on board?

The books I've read by Tracy Wolff were of a completely different feel compared to this one and with this being my first Katie Graykowski read, I certainly hope these two will be able to carry over the quirkiness that was her into how many other books are planned for the series. Lyric's twin, Harmony, is already looking like she's got the required quirky quotient and she seems to be different enough from Lyric that she won't come off as a mere carbon copy with a couple of differences thrown in just to set them apart. Heath and Lyric's love story was supposed to be a second chance romance, but in reality, this fateful meeting on the plane was the beginning to them later deciding if they would be willing to take the chance neither one of them realized they should have taken years ago. I couldn't help but wonder, though, if these two need to work on their communication because hello, Lyric just wasn't getting Heath at times. Lyric & Lingerie was kooky and silly start to a promising series and writing partnership. I'm giving this four stars. ♥