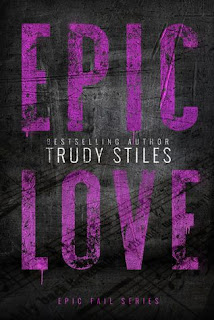 I slide into my car and immediately open the glove compartment. The light catcher that I gave Noelle for her fourteenth birthday is resting inside. I lightly swipe my fingers across the colorful crescent moon and so many wonderful memories flood my mind. She was so fragile, yet strong. She was so delicate and beautiful. She was tragic and perfect.

Epic Love is the third and latest novel in bestselling author Trudy Stiles' Epic Fail series and is about the lead singer of the eponymous band and the story of first love he shared with his next-door neighbor and best friend interspersed with living his life again and finding love lost--but never having really gone away--with one phone call. This series is a spin-off from the author's highly successful and much-loved Forever Family series, but while I have read the first two novels in Epic Fail and I did buy the first three novels in the original series I have yet to read them. I know, I know. I need to get my butt in gear and read them, especially since I'm now curious about Alex Treadway and his story with his wife Tabitha and because I found out that there'll be a couple of additional books in that series in 2017. The Epic Fail series can be read as a standalone in that I didn't feel as if I was missing out on any information--well, not counting what was going on with Tristan throughout the three currently available novels--although it did, like I mentioned, pique my curiosity and remind me that I had three novels still waiting patiently to be perused.

Heath Strickland and Noelle Durand were ten years old when they first met as neighbors, soon becoming best friends. For years, Noelle quietly hid the nightmarish life she was living behind closed doors, but Heath wasn't blind to it all, especially when the signs of what she was going through became increasingly more obvious and Noelle's excuses were no longer all that easy to take at face value. Young and in love, Heath wanted nothing more than to protect and defend the girl who owned his heart, but fate dealt them a hand that neither one could have prevented. For twelve years, Heath's life has taken a path he never expected, one he never dreamed he could live without Noelle by his side, but she was no longer with him, taken away by circumstances that were beyond their control but that he guiltily believes he could have done something about had he said something sooner. He enjoys the success being the lead singer of Epic Fail has afforded him, though his heart has never fully recovered from the loss of his first and only love. And then, without warning, Heath answers a call from an unknown number and his life changes yet again...

What is it about Trudy Stiles' writing that holds my attention from start to finish? In the three books in this series, there's always a unique twist, and the twist in this third one was clear from the beginning. But you see, even though I knew it was coming, how it came about, and what was going to come after its revelation. There's a purity to the love Heath and Noelle shared--both the platonic and romantic kind--as children and teenagers. It's the kind of love that can cripple you when it's gone, almost as if the other half of your soul is stripped painfully--but it's also the kind that can indeed survive even the toughest of hurdles if we allow it to. I don't want to go too much into the details of the story that awaits you in Epic Love, but what I will say is that the story and its main characters live up to the title. Heath and Noelle's love is of epic proportions. My heart ached for both of them as they shared their tale of tragedy and triumph. I highly recommend you read Epic Love, which I refuse to pigeonhole under one trope or in one category, but be warned that there are potential triggers, especially with regards to abuse. Five-plus stars. ♥

Read my reviews for the Epic Fail series: