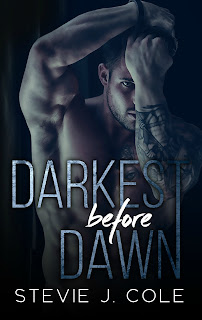 Darkest Before Dawn is a dark erotic romance standalone from Stevie J. Cole and is my second read from the author, having loved her Exrated romantic comedy standalone. This is story of twenty-eight-year-old Maxwell Carter and nineteen-year-old Ava Donovan. They're thrown together under the worst of circumstances, both forced to play their respective roles in a nightmare of a scenario that goes own for sixty-four days, only to lead into a different kind of bad dream afterwards. They're connected by a tragedy from twelve years ago, and now, they become each other's unexpected source of comfort, a comfort that may not make sense to anyone else except those like them who know firsthand what captivity--whether the one she's forced into or the one that he's imposed upon himself--is like and how it distorts everything else.

When Max was sixteen, he was put into a situation no child should ever have to endure. He made a choice, on that cost him and his sister far more than either of them bargained for. A dozen years later and Max's life is what it is, but that doesn't stop him from being protective of his younger sister. When he discovers that she's been taken by a sex slave ring claiming to sell love to its clients, he infiltrates their world in order to get to her. He becomes one of the men tasked to train the kidnapped girls into "loving" a client. The last person he expects to see is Ava. He knows she won't survive the world she's been thrust into, and Max shouldn't care about what happens to her, not with her ties to the man who destroyed his family. But Max wants to protect Ava, but can he protect him from the one person who could break her the most: himself?

This was, indeed, a dark and twisted tale, and the title, partnered with its synopsis, should already clue potential readers that this isn't going to have the hearts and flowers that you may be expecting from a romance novel. The romance itself is of a different nature, one that not everyone may have an appreciation for, but the story is well told and the characters and the things they have to go through are difficult to turn away from. There's nothing usual or common about Max and Ava's love story, even with how they deal with the circumstances of learning each other's histories. There are potential triggers in this book, so please go into it with caution. Triggers aside, this latest work from Stevie J. Cole has shown me that she isn't a one-trick pony, comfortable in two different genres. Darkest Before Dawn gets four stars. ♥

Purchase Darkest Before Dawn on Amazon.