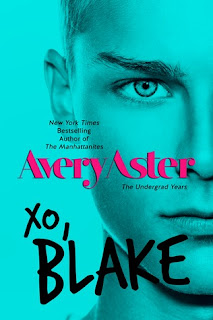 Note: This ARC was provided by Book Enthusiast Promotions via NetGalley in exchange for an honest review.

On one night out with his best friends, Blake Morgan finds himself losing consciousness and wakes up in the apartment of his two crushes, Diego Oalo and Miguel Santana. While Diego makes it pretty clear that he has a thing for Blake, Miguel prefers keeping his distance, thinking that Blake and his fellow Manhattanites, Lex Easton, Taddy Brill, and Vive Farnworth, are nothing but trouble. As much as he likes Miguel, Blake doesn't want to force himself on someone who doesn't like him, and Diego isn't someone you'd exactly consider a consolation prize plus he took care of Blake after he blacked out in Glamorama.

But Blake's got other things going on in his life, things that need his attention before he can even consider being with Diego. His three best friends were with him at the club and while Lex is fine and Vive seems to have recovered, Taddy is in the intensive care unit of the hospital and the entire group receives word of a complication in her condition. Already there are vultures circling, ready to name names and tell the world what happened inside the club. Then there's Thor, one of Blake's closest friends and his roommate, who has just received devastating news. Could this all be coincidence or is someone after the Manhattanites?

Okay, I'm officially crushing on Blake Morgan, lead character of XO, Blake, book three in The Undergrad Years series by Avery Aster. He already proved the kind of friend he was in the first two books and now that he's got his own story to share, he's now tied with Taddy Brill as my favorite Manhattanite. Heck, he may have actually edged Taddy out by just a teeny, tiny bit. Blake has parents who love and support him and he probably had the most drama-free coming out story ever. He knows when to lighten moments up with humor and yet he's the most reliable person around when his friends need him in any way, shape, or form. And now, he finally gets to have his very own slice of happiness in his personal life through Diego.

To be honest, between Diego Oalo and Miguel Santana, there seemed to be something about Miguel that was more intriguing and since they're both part of Blake the adult's story in The Manhattanites series, Unsaid (due out later this year), I'm curious to see what's happened since the events in this book and what happens in the present. Blake is one of those guys who deserves a happily ever after simply because he's such a nice guy. If his love and loyalty weren't enough in books one and two of The Undergrad Years, the fact that he was there for his Lex, Taddy, and Vive, and most especially, Thor in such extenuating circumstances deserves credit. He is the standard by which friends, gay or otherwise, should be measured!

Of the three currently available books, I must admit that this one is my favorite, and it isn't simply because I love my LGBTQIA fiction. The story had a more serious side story and Blake was an eighteen-year-old with a heightened sense of responsibility and maturity. The humor that is part and parcel of this series is still very much there, so don't think that this is a tearjerker of a book. The synopsis of and sneak peek into Unsaid also makes me wish that it's release date were sometime this month, but it definitely looks like a book worth waiting for. You can read XO, Blake as a standalone, but since book one is only 99 cents and book two is currently free, you may want to consider reading them all in order. I'm giving this 4.5 stars! ♥