Review: Witness to Passion by Naima Simone (Guarding Her Body #1) 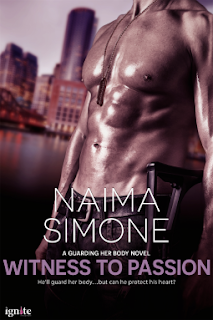 Fallon Wayland has had some really sucky birthdays nothing comes close to this most recent one. She's running late for work, her idiot boyfriend has just broken up with her via social media, and now she's witnessed a murder. Even after having her life threatened by the murderer himself, she decides to give her statement to the police and picks the guy out in a line-up. When the perp turns out to be part of a crime family and escapes from police custody three months later, Fallon realizes how dire her circumstances are but still isn't overly thrilled at the idea of having the guy who rejected her when she was eighteen being the one and only person who could protect her.

Shane Roarke has never forgotten the kiss that he and Fallon Wayland shared the night of her eighteenth birthday. He did what he felt was the right thing by pushing her away, knowing she was still young and that she was his sister's best friend. He's tried to keep his distance all these years but knowing that her life is in danger because of a murder she witnessed, Shane will do absolutely anything to keep her safe. With no other choice but to stay together in close quarters, Shane and Fallon can no longer deny the attraction that's been simmering between them for years. Protecting Fallon looks far easier than protecting both their hearts from falling hard for each other.

Witness to Passion is the first book in the new romantic suspense Guarding Her Body series from Naima Simone. Fallon Wayland and Shane Roarke have known each other for many years, Fallon being Shane's sister's best friend and they've kissed once--a kiss that was filled with pent-up want and passion but ended with Shane pushing Fallon away. In the years since that unforgettable kiss, Shane keeps his distance from Fallon, but one phone call from his sister telling him that she fears for Fallon's safety has him in her personal space, doing whatever's necessary for her safety. There's a lot of heat between the two of them and when they finally realize it's time they stop denying themselves the need to be together, it's incredibly intense, even though they foolishly insist on keeping it temporary and without any strings attached. Yeah, we all know how well that works out in books. ^.^

While the sex and romance could steam up anyone's tablet or reading device and could get you to sigh in satisfaction, especially that last chapter, the mystery and suspense in this book are nothing to sneeze at. We know who's after Fallon, but the fact that every move she and Shane make is countered makes it rather obvious that there's someone who's been ratting them out. Trying to figure out who's betrayed them was fun for me because I like doing stuff like that when it comes to books in this genre, and my first guess was right on the money, though I did wonder once or twice if I was mistaken or not, especially since I made my guess so early in the story, plus the reason behind the betrayal shocked me so bonus points to the author for that. The other members of GDG Security Solutions, Shane's security company, are mysterious and interesting enough for me to want to read their stories, assuming these men are the focus of the series. ^.^ Witness to Passion easily gets 4.5 stars. ♥