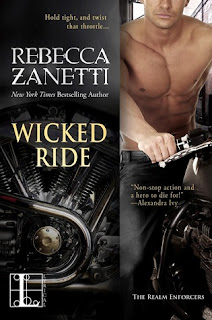 Detective Alexandra Monzelle has made it her life's mission to get illegal drugs off the streets of Seattle. Being the daughter of a convicted drug dealer has shown her the kind of damage drugs can do to those who sell and buy them. With a new and very potent drug called Apollo on the rise, Lex does whatever's necessary to get to the bottom of who's been distributing it and ends up meeting Kellach Dunne while undercover. She's not sure what to make of the Irishman, torn between wanting to haul his ass in for being a member of the notorious Titans of Fire motorcycle club known for their criminal activities and wanting him in a way she would never admit to herself or anyone else for that matter.

Kell is after the Apollo and wants them off the streets as much as Lex does but for different reasons. He's an enforcer for the Titans of Fire MC, but that's just his cover. He's actually a witch enforcer and he and his brothers need to find out who's behind the creation and distribution of the dangerous drug, one that they suspect is meant to harm witches. He knows that Lex has a job to do and so does he but he can't help but become protective of her even though she keeps trying to remind him that she can protect herself. Unfortunately, he doubts she's ever come across immortal foes from the Realm and Kell becomes more than aware that with Lex in his life, there's even more at stake when it comes to his mission.

Wicked Ride is the first book in the new Rebecca Zanetti paranormal romance series entitled Realm Enforcers, which is a spin-off of her highly successful Dark Protectors series. Kell Dunne is a witch enforcer from Ireland and Lex Monzelle is a vice cop from Seattle. They both want the same thing--to put a stop to Apollo, a dangerous new drug--and are even employing a similar tactic--going undercover. The fact that Kell's a member of a volatile MC certainly makes Lex wary of him, but there's more to the man than meets the eye. Calling what they have between a spark would be the understatement of the year, but neither of them were looking for a distraction, especially not when they were both in the middle of something as important as chasing after whoever was behind Apollo. But then these two were a combustible match, and when the inevitable happened, there were even more surprises in store for them.

This is my first ever Rebecca Zanetti read. Hey now, no need to give me those looks! I know how sad it may seem, especially since I've read a lot of great things about the author's other books. Trust me, after reading this one, I've added all the rest to my to-be-read list and I shall try to work my way through each and every single one within this year. Fingers crossed! I can see exactly why the author's got as strong a following as she does. Wicked Ride was exactly that--a wicked ride--and it had snarky wit, steamy romance, addictive suspense and action, and a witchy way about it that made it difficult to put down. Not all of the questions I had in my head were answered with this first book but that's only as far as the drug is concerned. So, as far as cliffhangers go, there isn't one when it comes to Lex and Kell. ^.^

One of the best things about this book was its cast of characters, especially those belonging to Kell's family and other members of the Realm. You would think that having a lot of memorable people in a story would be distracting, but I'm actually finding myself anticipating what they're stories will be as the series continues. Lex was used to being self-sufficient and self-reliant while Kell was always protective and watchful, but they both learned to lean on one another when the situation called for it, so you do see growth in them as individuals and as a couple. Lex showed Kell that she wasn't some fragile female and Kell showed Lex that he was worthy of her trust. Ah, these two were a joy to get to know--both passionate and loyal and capable of a lot of love. I enjoyed them and their story. Wicked Ride gets five stars. ♥