Review: The Vixen and the Vet by Katy Regnery (a modern fairytale #1) 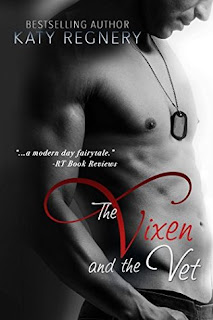 "I never stopped loving you, Asher. Not for a second. Not once. I was stupid enough to think my career could possibly matter more to me than you. Because what I quickly found out was that nothing matters more to me than you. Nothing. And I'll survive without you...but I can't really live unless I'm with you."

Finding herself back in Danvers, Virginia after her career imploded, due in large to a source she thought she could trust only to realize she was manipulated, journalist Savannah Carmichael tries to focus on her younger sister's upcoming wedding. With one phone call from a fellow journalist, Savannah has an opportunity to get her career back on track, even if it means a shift from investigative journalism to human interest. To appeal to readers wanting a feel-good piece slated for a Fourth of July release, Savannah decides to try her chances and write an extensive article on Danvers' own hometown hero turned disfigured recluse: war veteran Asher Lee.

There was no doubt that he was intrigued by the beautiful woman standing on his doorstep in a sundress and offering up a plate of homemade brownies, but a request for an interview was something Asher Lee wasn't sure he was willing to give up his privacy and self-imposed solitude for. But maybe this was the time to let someone in, someone who might be able to see beyond his missing limb, his limp, the burns, and the scars. As the multi-part interview allows them to get to know one another, their unlikely friendship blossoms into an unexpected love affair, but can their relationship overcome the trials and tribulations on the way to their much deserved happily-ever-after?

Where do I begin? Katy Regnery's The Vixen and the Vet, the first novel in her a modern fairytale series, was a book that I had heard good things about in 2014. When it went on sale in January of this year, I went ahead and bought it on Kobo (because Kobo doesn't have the whole additional two dollars thing for my country that Amazon often imposes). But with my already extensive to-be-read list, I hadn't gotten around to reading it until I decided to join the blog tour for the second novel in the series, thinking it was a sign for me to read both books in order. So, that's what I did, reading book one in one sitting before I went to bed and reading book two in one sitting soon after waking up hours later. And here I am, days later, still experiencing a book hangover of epic proportions, because there are books that leave you with a smile on your face then there are the ones that make your heart beat faster, squeezing it in just the right places, and bring tears to your eyes, celebrating the highs and empathizing with the lows the characters go through. The Vixen and the Vet is one of those extraordinary books, moving me with words that create the images in my head, directing a movie of sorts in my mind.

Savannah Carmichael and Asher Lee's love story was one that flourished over time, beginning with the awkwardness, though not wariness, that you expect between two people who aren't too sure what to make of the person they're about to spend an extended amount of time with. Then you see them opening up and establishing a level of trust and respect and observe that they truly do like each other. There are no ulterior motives involved, just a simple enjoyment of each other's company, though it certainly doesn't hurt that there's an unacknowledged yet mutual attraction going on. I so loved these two lead characters because their love felt true and pure, going beyond the physical and coming together as two people who were meant to be. And even though there were those who questioned how someone like Savannah could fall in love with someone as damaged as Asher was on the inside and out, there were those who understood, accepted, and supported that love, so I couldn't help but name the oh-so-wise Judy Carmichael, Savannah's mom, and matchmaker Matilda Potts, Asher's official housekeeper and unofficial guardian as my favorite supporting characters.

This book highlights the power that true love can yield and that, with any sort of power, it can lead to both good and bad. When you misuse that love or take it for granted, the hurt you cause can often be unbearable, ending in heartache that can last for varying periods of time, depending on the severity and how quickly you're able to make amends and rebuild the trust that was lost. Yet when that love is nurtured and protected, the rewards can be encompassing and immeasurable. Savannah and Asher gave each other hope and faith on top of the love, trust, and respect, but theirs was a love that was easy and simple and only became complicated when the prejudices and actions of others and an unfortunate lapse in judgment and decision-making came into play--at least that's how I saw it. I know that people say fairytales can't exist in a world like ours, one that's full of cynicism and harsh so-called realities, but this story makes you want to embrace the notion that we can have our happily-ever-after and all it takes is the belief in its possibility. Savannah and Asher captured my heart and made me believe. ^.^ The Vixen and the Vet is an all-time favorite read and gets five-plus stars. ♥

Purchase The Vixen and the Vet on Amazon | B&N | Kobo.