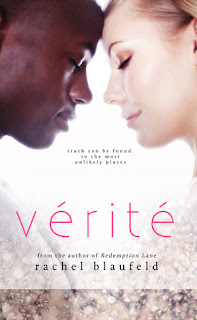 He blew out a long breath. “That’s the fucking truth. I want you. All of you.”

“Vérité . . . that’s the first time anyone has ever given me that,” I half mumbled, half whispered to myself.

“The truth. You’re the first person to give me the truth.” I looked into his eyes, sailing away in the blue, riding the waves of his emotion as I tried desperately to hold on to my life jacket—or my resolve.

“Then cherish it, and don’t throw it back in my face.”

Tingly Simmons knows her reputation precedes her, and it isn't a reputation based on her success as a varsity track athlete that has whispers being exchanged based on second-hand gossip and lingering looks of disgust or disappointment. That's what happens when a foreign language sophomore has an illicit affair with her very much engaged professor and both are caught in a, to put it mildly, compromising position. A year later, Tingly is working to get her life back on track, literally and figuratively. She has no time or no need for any distractions, especially not one in the form freshman basketball player Tiberius Jones. But Ty refuses to give up on the girl he calls "Rex", wanting Tingly to see herself the way he does.

Tingly and Ty may not appear to have a lot in common, other than both being varsity athletes for their university, but Tingly intrigues Ty. Even as she tries to avoid him or tries to push him away, he isn’t the type to give up, especially because he knows there’s more to her than the reputation that’s been hounding her since the year before. With people around them telling them that being anything more than acquaintances is a bad idea, Ty needs Tingly to see that being together isn’t a risk; it’s an inevitability.

When I first opened this ebook, it was past midnight and all I wanted to do was to check the number of pages so that I could figure out how long it would take me to read the entire thing. And then I read the prologue and that was it. I couldn’t stop flipping from one page to the next until I realized I had reached the end of the story and it was about three in the morning. I still blame Rachel Blaufeld for the lack of sleep but that’s what happens when a story as good as the one she’s created here in Vérité sucks you in and holds on for dear life.

I liked Ty and how mature he was for his age, obviously in large part to his upbringing, courtesy of his mother, and the life he led prior to going to Hafton State University. When he set his mind (and heart) on something, whether it be his studies, basketball, or Tingly, he refused to be dissuaded. On the other hand, Tingly may have made a colossal mistake when it came to her relationship with a professor, but she had the courage to stick it out, even though the scene of the crime was the very university she didn’t want to leave. Without a doubt, it would be way easier for her to have transferred elsewhere, so I definitely liked that she wasn’t easily scared off and that she faced off to the consequences of her actions.

Ty and Tingly’s relationship underwent a lot of ups and downs, and if Ty was a lesser man, he would have probably thrown in the towel and thought to himself that it simply wasn’t worth all the heartache and aggravation. But see, this is why Ty was such an amazing male lead character—giving up was never an option for him, whether in life or in love. Theirs was a love story that was about fighting for what you believed in and they believed they were meant to be together. It was also about overcoming whatever circumstances you may have in your life and not letting those circumstances take control of you. Rachel Blaufeld’s writing, especially the dialogue, felt real and authentic, almost as if you were standing right there listening to the characters talking openly. This is one of those books that turns out to be so much more than you expected it to be, tackling deeper issues while still being able to bring forth a beautiful love story. I've enjoyed Rachel Blaufeld's three previous releases but this standalone new adult (NA) romance is above and beyond her best work to-date. I’m highly recommending Vérité and give it five-plus stars. ♥