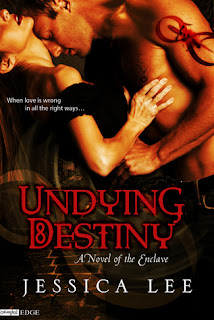 Kenric St. James is the leader of the Enclave, a group of vampire warriors seeking to protect humanity from the scourge of DEADs--vampires addicted to what's known as Death Euphoria, the high a vampire achieves upon the death of their human victim. He knows that his sire, Marguerite Devonshire, is behind the rash of DEAD attacks in the area. She wants Kenric back for her own selfish purposes and will do anything to claim him again.

Putting a stop to her evil reign as an ancient vampire and seeking vengeance for what she did to him and the murder of the human he was in love with are what Kenric has wanted for over three centuries. And then he meets the first woman he's ever wanted to spend eternity with but having her by his side puts her in the path of the possessive and obsessed Marguerite and losing Emily Ross is the one thing that Kenric may not be able to survive.

Undying Destiny is the first novel in The Enclave, a paranormal romance series by Jessica Lee, and was originally released in August 2009 under a different publisher and with the titles Desire to Die For for the book and Warriors of the Enclave for the series. Here we have Kenric St. James, a master vampire and co-founder and leader of the Enclave, and Emily Ross, a human working as a nurse and ends up rescuing Kenric after he suffers life-threatening injuries at the hands of DEADs.  The pull between Kenric and Emily is undeniable and she's soon on the radar of Marguerite Devonshire, Kenric's sire. Marguerite's interest in Kenric isn't merely due to her Fatal Attraction-like need to be with him. With Emily's life in danger, Kenric must keep Emily close but can she really be protected if the threat is coming from within? Are you intrigued yet? ^.^

I absolutely LOVED this book! Heck, I read the four books back-to-back-to-back-to-back and can say unequivocally that The Enclave series is now an all-time favorite. This first book was dark but there was certainly nothing dreary about it, introducing me to the world of the Enclave and each of the vampires that have been chosen to become part of it. Kenric and his crew are fiercely loyal to one another and to their cause but there is a twist, one that was presented in a way that you saw it coming but you're still left with an inkling of hope that maybe things won't go as terribly as you know it will. It's also part of the story arc that runs throughout the series, and is actually one of the reasons I moved from one book to another in the span of an entire day. ♥

Kenric and Emily's romance was interwoven with the Enclave's mission to get rid of the DEADs and Kenric's personal vow of vengeance against Marguerite. I liked these two together because they were both strong-willed and stubborn but had that connection that I always look for in the lead characters of the books I read. I got Emily's need for independence but loved how Kenric's alpha male was more about wanting to protect and care for her instead of simply wanting to be the dominant figure in their relationship. There's an honest-to-goodness love and affection between the two of them and hello, the whole blending thing was a mating ritual I've never, ever come across in any of the vampire romances I've read. It was original AND hot!

While Kenric and Emily's love story does get resolved in this book, there are unanswered questions with regards to the Enclave as a whole and with Marguerite in particular. So, there is a cliffhanger of sorts, but nothing overly frustrating...but maybe I'm just saying that because I already had the rest of the series waiting for me so there wasn't really much waiting going on. Hehe. And this is why I'm now going to suggest that you read the books in order. Each one is an exceptionally good read and if you're a fan of paranormal romance and with a particular love for vampires, you really NEED to read the series. Undying Destiny gets five out five stars. ♥