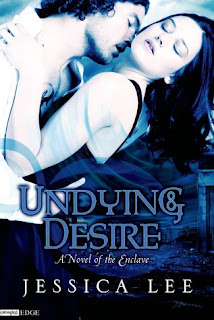 How had ever existed before her?

No. Guerin was dead wrong.

Guerino Lombardi is on a mission, one that's taken him to Germany. He's trying to locate Eve Devonshire, the hybrid daughter of Marguerite Devonshire. He needs to find out if she truly is master vampire Kenric St. James's daughter as well, since this was Marguerite's claim before they were finally rid of her and her evilness. When he does find her, Guerin is intrigued by the half-human, half-vampire before him. He can't help but submit to the woman that may have her mother's looks but is truly her father's daughter underneath all her beauty. But will she still trust him once she learns that he's part of the Enclave?

Eve has existed for three centuries knowing only how her father abandoned her and her mother, never caring about her at all. But she's too busy trying to keep her identity secret from those who seek her out for their own devious purposes. After all, a vampire like her mother conceiving a child was unheard of and there are vampires out there who want to learn more, even if it means taking Eve against her will. Guerin stirs emotions she never thought possible but his deception forces her to walk away. When his past and her present collide, to what extent will either of them go in order to save the one person they love?

Holy crap! Undying Desire, the third book in The Enclave series by Jessica Lee, has gone above and beyond my expectations! This book about Guerin Lombardi and Eve Devonshire took me to the edge and then, just when I thought it couldn't get more intense, had me toppling over. One of my favorite things about the books in this series is that each story is both original and different, allowing each one to stand on its own but still tying everything together. Guerin and Eve's love story was intense and what these two had to go through proved just how much they were willing to sacrifice for the other. This had a BDSM theme to it but it was presented in a creative manner, but I guess it should be that way since these are vampires we're dealing with and I doubt a little love tap here and there would satisfy their appetites. ^.^

While I did figure out who Seth Keller, the vampire seeking out Eve, was working with, I still found myself somewhat shocked with how everything played out. The whole thing also ties in to Guerin's past and the life he once lived as a vampire and how Eve works into his life now. I will admit that I wasn't quite expecting what I learned regarding Guerin's history, considering he's always been this stoic co-founder and second-in-command of the Enclave, but it does add this extra layer to an already interesting lead character. Hey, I already knew that these Enclave warriors were complex characters, but they never fail to surprise me anyway, which is why I simply can't get enough of them and the women they intend to spend the rest of eternity with. ^.^ These are stories and characters that really demand your full attention.

You would think that the third book in a series would somehow reach some sort of plateau, because it is rather difficult to maintain the high quality of storytelling over a number of books. However, Undying Desire bucks the trend, showing that it didn't just maintain the level achieved by the first two books but surpassed it. The writing is undeniably excellent but it helps that the story itself is something otherworldly. Vampires are nothing new in the world of fiction but with so many books out there, both past and present, readers like me look forward to coming across elements that we've never read about before. Jessica Lee has definitely taken things to a whole new level with Undying Desire, and based on the reviews I've read, I'm not the only who loves all things Enclave. This third book gets five-plus stars! ♥