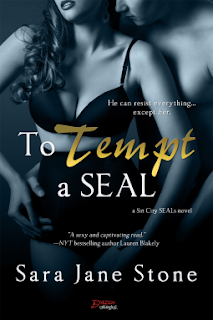 
Scars may permanently be etched on her face but Lucia Lewis is going to use the mask she has at her disposal to finally tick some fantasies off her checklist while at the masquerade ball in Las Vegas. When she meets Navy SEAL Cade Daniels and he discovers her fantasy list and is more than willing to help her achieve every single one the entire weekend, Lucia knows this will be something she will never ever forget.

Cade Daniels agreed to keep an eye out for his best friend's sister, but when he sees just how irresistible a package she is, he breaks the most important promise he made--not to sleep with her. The temptation that is Lucia Lewis, even with her scars bared, is too much for Cade to resist. But will he be able to walk away from the woman that makes him want more even though he his being a Navy SEAL has always come first?

To Tempt a SEAL is the first first book in the Sin City SEALs series penned by Sara Jane Stone and has Lucia Lewis, an art therapist from Tennessee, and Cade Daniels, a Navy SEAL from California, as its leads characters. Lucia has facial scars from an attack she survived when she was just a teenager and she knows how people react to them. Going to Las Vegas provides her with an opportunity to make her fantasies come to life and the one to help her do it is Cade, who knows all about her plan and is there on the bequest of Lucia's sister, who just happens to be Cade's best friend. While he may have promised to not sleep with Lucia, he ends up deciding to break that promise when he gets a glimpse of her list. In the few days they're together, he makes her feel beautiful and desirable, and she stirs within a very unfamiliar feeling of love.

This was a steamy story about how the fantasies we come up with are incomparable to the reality before us. Lucia wanted a man to fulfill her sexual fantasies and Cade wanted to be the man to do so and then had a few of his own that he came up with, but neither of them expected to end their time together wanting and needing much more than they bargained for. An additional complication is the secret Cade is keeping from Lucia--the one about him being sent by Lucia's sister to watch over her--plus there's the fact that his own parents ended up divorced when his father kept putting his job as a Navy SEAL ahead of his family. While the whole falling in love part may feel a bit too quick, the story itself is sexy and sweet and you can't help but root for these two. I'll be keeping an eye out for the rest of the series. Four stars for To Tempt a SEAL. ♥