Review: The Tide of War by Lori A. Witt (Defending Epsilon #1) 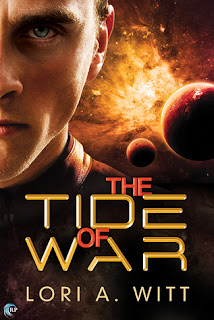 Planet Earth has been caught in an ongoing battle against an alien race called the Menarians. The Earth Fleet, composed of the world's best pilots and gunners, has one group defending their home turf while another, known as the Elite Squadron, is taking the fight to the Menarians. Lieutenant Commander Kyle West has felt the pressure to join the Elite Squadron for quite some time, but he refuses to leave his family behind...until he's left with no other choice but to seek revenge on the aliens destroying his world.

Commander Andrei Dezhnyov and  his wife are considered among the very best on the Elite Squadron and they need more of the same, if not better, if they are to succeed in defeating the Menarians. Among the latest batch sent over includes Lieutenant Commander Kyle West and his wife, one of the most highly decorated pilot-gunner teams around. Soon, the two pairs enjoy a camaraderie based on mutual respect, and affection. But when more squadron members are lost and a devastating secret begins to unravel, Kyle and Andrei begin to question the very foundation of the mission they've dedicated their lives to.

The Tide of War is the first novel in the Defending Epsilon series by author Lori A. Witt. I only realized this was part of a series when I went on Goodreads in order to snag the cover photo for my review. The book reads quite well as a standalone, so I'm curious to see as to what the next book will be about and if American pilot Kyle West and Russian gunner Andrei Dezhnyov will be playing some part in it or not. So, yes, I will definitely be waiting eagerly for book two, especially since I have yet to be disappointed with anything by the author that I've read so far, regardless of which pen name she uses. ^.^

There was a lot about the story that I wasn't expecting, same goes for the character profiles for Kyle, Andrei, and their wives, Commander Emily Blaine and Captain Ogrufina Teterev, respectively. There was so much about The Tide of War that was refreshingly new and different, all in good ways. While I do read science fiction, I will readily admit that it's not my automatic go-to genre, but I've been quite fortunate that the very few I've read this year have been exceptionally good, this title included. With a clue here and a clue there, I kind of figured out that there's more going on than meets the eye, but when it was finally revealed, I was gobsmacked because there was no way I could have anticipated the degree of deception that was going on! O.O

This book was far from boring, holding my attention with the action, suspense, and intrigue going on coupled with different love stories involving both Kyle and Andrei and the ones they've shared their lives with. The relationships that Kyle and Andrei engage in present fresh perspectives on love, sex, friendship, and commitment between two people. I'd venture to say that this isn't really a sci-fi romance novel, mainly because of what the term "romance" means to me and how it plays out between the main characters of the story, but there is most definitely a variety of stories of love that were at play. Love between two people in a committed relationship, love for a friend, love for the world we live in, etc. If you're looking for wooing and courtship, you won't find them here, because the characters have evolved differently, what with being in the middle of inter-galactic war. However, if you're searching for a well-written and original story and characters, then I highly recommend you read The Tide of War. I'm giving this five stars. ♥

Purchase The Tide of War on Amazon | B&N | Kobo | Smashwords.