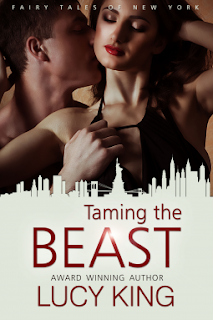 Mercedes "Mercy" Hernandez and Sebastian "Seb" Madison shared one unforgettable night together five years ago. Of course, neither of them will ever admit that it was so memorable, especially since Mercy thinks that Seb manipulated what happened to simply get her to stop talking about his sister and Mercy's best friend, Zelda. Seb never bothered to correct the conclusion Mercy reached after they slept together and he prefers it that way. He doesn't let anyone get close to him--not his own sister and not the girl he still dreams about. But when they agree to a no-frills, no-strings, purely sexual affair, neither of them is prepared when it slowly but surely evolves into the one thing they never expected--love.

Taming the Beast is book number three in the multi-authored Fairy Tales of New York series and was written by Lucy King. Here we finally get the story of Seb Madison and Mercy Hernandez. Seb has always been a mysterious character, having been mentioned since the beginning of the series and portrayed as an unfeeling brother to his sister Zel. There's very little known about him other than his being the only survivor of a car crash that took his parents, making him Zel's legal guardian. He's used to be alone and appearing unaffected, but his confrontations with Mercy show that she may be the one person able to break through his walls and he's able to open up with her, even if it is in small increments.

Of course, I can't help but wonder why it's only Mercy that Seb reacts toward, especially since Zel was able to call him on his BS in the third book and he didn't appear to be fazed that much. Maybe he's so used to separating himself emotionally from her that nothing she says or does reaches him and it took a spitfire like Mercy to do so. Still, I think it's rather sad that his relationship with his own sister is so fractured that even when she confronts him and lets him know exactly how she feels, he remains somewhat unmoved. That's what guilt does, I guess--it may have made Seb feel as if he wasn't worthy of still being alive and that the darkness within him was something he didn't want to knowingly inflict on other people.

The Seb and Mercy love match was one that evolved from two individuals who looked at engaging in a scheduled affair in a cerebral manner--examining the benefits and coming up with rules to be followed--to a more emotional one. I'm glad it wasn't rushed, especially since this is a rather short read, and that Seb didn't magically transform into some touchy-feely guy with his heart on his sleeve overnight. I also like that enough attention was focused on Seb's relationship with Zel without taking too much away from his ongoing love story with Mercy. This was a good story about finding both love and absolution and keeps the series on a definite high, leaving me excited for the fourth and final book. Taming the Beast gets four stars. ♥

Pre-order Taming the Beast on Amazon.