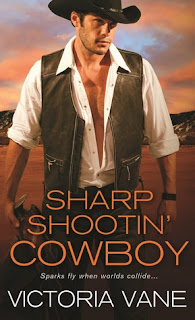 When Reid Everett and Haley Cooper first met, he was already a Marine sniper preparing to head out to Kuwait and she was a biology student preparing to go to UC Davis to get into veterinary college. From the get go, the differences between them were obvious the minute they started talking to each other, but there was also an attraction, one that Reid didn't want to limit to a mere one-night stand. Eighteen months later, they meet again and while their reunion proves to be one neither of them will ever forget, Haley stubbornly chooses to focus on their ever-present differences and they go their separate ways yet again.

Nearly six years have passed since Reid Everett and Haley Cooper have seen one another. Now, they're both in Wyoming--he's working in his family's outfitting company after having left the USMC and she's the federal liaison sent to oversee wolf management in the area. Their differences are still very much there and they still spark debates and arguments but one spark neither of them can deny is the one that goes much deeper and still exists between them. But will Haley finally be able to look beyond all the reasons they shouldn't work to realize that that there are reasons they do work as a couple before it's too late?

Sharp Shootin' Cowboy, which was originally titled Sharp Shooter when I originally received the advanced reader's copy, is the third book in the Victoria Vane-penned Hot Cowboy Nights contemporary romance series. Reid Everett was introduced in the second book as an old friend of Dirk Knowlton's and I had a feeling then that his story would probably be told next because he was, after all, a cowboy. I enjoy reading stories about characters that are opposites, but I will admit that I wasn't a huge fan of Haley Cooper's for most of the story. She was bullheaded and closed-minded for a really long stretch and while I'm all for sticking by your beliefs in whatever realm of thinking, I'm also one for respecting differences and not insisting that others believe what you believe. Thankfully, and with Reid by her side, she did win me over because she did what she did when it counted...and I shall leave it at that. No spoilers, people!

Aside from Reid and Haley's love story, I enjoyed the struggle they both faced regarding the situation with the wolves roaming the area and how best to handle it. They obviously had differing opinions and both were set in their ways at varying degrees. Both Reid and Haley had strong arguments for why their methods were best and it does make you think about issues like why there is a need to control animal population and whether you agree or disagree with either Reid or Haley. Books that make you think are always a favorite of mine, so kudos to Victoria Vane for setting this romance in the middle of a serious and thought-provoking issue. So far, I've enjoyed the three available novels in the series and I do like that the women the cowboys are partnered with aren't desperately looking for someone to swoop in and ride off on a stallion to safety. Ah, cowboy romances never get old. Sharp Shootin' Cowboy gets four stars. ♥