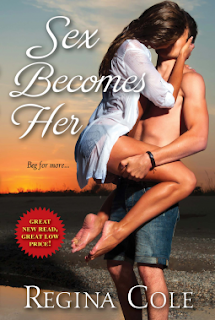 Eliza Jackson's reputation is in ruins after her ex-boyfriend spreads word around town about her penchant for kink in the bedroom and adds on his own set of lies to the mix. Yes, she may want to experiment in the bedroom, but that doesn't make her some sort of deviant...right? Her best friend's upcoming wedding in Hawaii may be exactly what she needs to get her sexy back on and fellow bridal party member Chandler Morse may be just the man to help her out.

Chandler notices Eliza the minute he sees her at the airport and sharing a seat next to her on the plane only piques his curiosity even further. Learning that she's attending the very same wedding he's going to, Chandler makes his interest in her known. When she shares with him a few of the things she'd like for him to do to her, he promises to give her whatever she wants. But will their intense connection survive once they go back to their everyday lives far away from each other?

Sex Becomes Her is the first book in the Sexy series from author Regina Cole and is an erotica novel with a BDSM theme to it. Chemist Eliza Jackson made the mistake of telling her then-boyfriend her ideas to spice things up in their bedroom. Now, she's considered a pariah in their town, with people thinking she's a sex-craved lesbian into every sort of kink you could think of. A trip to Hawaii to be a bridesmaid at her best friend's wedding has her crossing paths with the best man, private investigator Chandler Morse, who turns out to be nothing like her ex. Chandler is more than interested in her and when she gathers the courage to let him know some of things she wants sex-wise, he doesn't turn away in disgust. Their time together in Hawaii shows both Eliza and Chandler that not everyone is like their respective exes, but this was temporary and even if they wanted to maintain any sort of relationship, being in different states will make it difficult. However, it's never easy to walk away from the one person who could very well be "the one".

I admit that the idea that one man was tarnishing the reputation of someone like Eliza had me raising my eyebrow in disbelief. The fact that this idiot was telling everyone bedroom secrets and making up a bunch of lies based on his discomfort and obvious inability to satisfy his partner should have made him the one the town shunned. Sadly, Eliza being made to look like the bad guy didn't surprise me. People will believe what they want and gossip about a woman being adventurous in the bedroom is far juicier than news about a man who spends way too much time trash-talking his ex. I also understand why Eliza's bedroom preferences were difficult for her to share. It took a considerable amount of courage for her to do so with her ex and look how that turned out. The fact of the matter is, he was an ass and she deserved someone better. Thank goodness for Chandler because the guy was secure and open-minded.

While Eliza and Chandler's love story was pretty good, I found myself baffled by the behavior of Chandler's cousin Gregory Trailwick. He was warning Chandler about Eliza but I don't think it was ever established what his actual issue was other than being protective of Chandler, who had gone through a rather ugly divorce. Then there were all these little clues that all was not as it seemed between Greg and Sabrina Hough, Eliza's best friend, but we never really get any conclusive answers as to what's going on. Heck, same goes with Stacey Hough, Bree's cousin and the maid of honor. It's like there were moments something more was going to be divulged but then nothing. There were a number of unresolved issues but I'm going to give the author the benefit of the doubt and hope that I'll get what I'm looking for in the next book (yes, I'm assuming it'll be about Greg and Bree). For now, I'm giving Sex Becomes Her four stars. ♥