Review: Seduced by the Baron by Amy Andrews (Fairy Tales of New York #4) 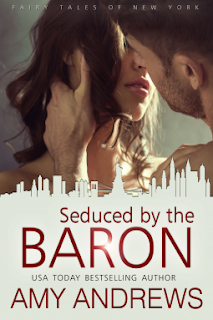 Faith Sullivan gave up her dreams of going to Columbia University and becoming a painter when she decided to take care of her ailing father and the family-owned bar that she loved. Her best friends have all found their happily-ever-afters with the men they love, two of whom just happen to be her very own brothers. At twenty-six, she's still taking care of things at Sully's and each year that's passed makes her dreams feel even further away and she wonders if she'll ever get the fairy tale ending everyone else has.

Rafael Quartermaine traded in his surfboard for beer taps and now finds himself in New York, hoping to convince Faith Sullivan to give Baron, his own microbrewery-produced lager, a trial run in Sully's. He quickly discovers that there's more to Faith than being a bartender and he wants to convince her to let her hair down and spend time with him while he's in town. Will Faith finally find her own forever-after with the beer baron on the go or is she in over her head and risking her heart with the man from Down Under?

With any series, you want the final book to end on a high, especially if the ones that came before it were good reads. As far as the multi-authored Fairy Tales of New York series is concerned, Amy Andrews's hit the ball out of the park with Seduced by the Baron, the fourth and final tale in the collection of stories about four best friends who find love and fulfillment with the men they're meant to be with. We finally have Faith Sullivan's story, one that didn't have her falling in love with any of her best friends's brothers, though Rafael Quartermaine does have a connection to one of them, Mercy Hernandez.

All four best friends have had their family issues, but Faith's is unique in that she's very close to her father and brothers and would do anything for them. She's taken on the task of managing the Irish pub they've owned for decades, something that her family has taken for granted. They've gotten used to her handling Sully's and whatever her father requires and both her personal and professional dreams have been put on hold for far too long. Rafael's appearance in her life opens her eyes to the possibilities of having a life beyond the pub but the weight of responsibility still sits very heavily upon her shoulders.

Faith's story was inspired by the Cinderella fairy tale by Charles Perrault and while Faith isn't a scullery maid being abused by her evil stepmother and stepsisters, the parallel of putting everything and everyone else's needs and wants ahead of her own is clear. As with Cinderella, Faith's servitude is one that she feels she cannot refuse, but in reality, she could have said something to her father and brothers. I also liked that Mercy, Dawn Turner, and Zel Madison were like three fairy godmothers (which is a bit more Sleeping Beauty-esque since Cinderella only had one) giving Faith her turn at a fairy tale ending.

I loved this tale of love, family, and friendship and how dreams that have been put on hold can still be made into reality if only we choose to finally make time for them. This last book in the series wrapped everything up quite nicely and we finally find out who the heck stole the altar wine in the first place (and the person I suspected really was the one who did it!). I'm still going to keep my fingers crossed that these four authors band together once again to create a new series, whether they be more modern fairy tales in another locale or something different. Seduced by the Baron gets 4.5 stars out of five. ♥

Pre-order Seduced by the Baron on Amazon.