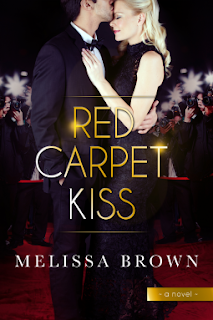 Eleanor Riley's personal experience with love and heartbreak spawned a bestselling series of books that have now inspired a successful primetime television series. It's been ten years since she allowed herself the possibility of becoming involved with someone, but Luke Kingston, a new addition to the series, makes it difficult for her to remember why she's so against it. He's gorgeous, a fine actor, and an all-around good guy who has yet to become blinded by the trappings of the business. And just when things are heating up between the two of them, Elle's past catches up with her and the man who calls her "Rigby", Troy Saladino, stirs up feelings she thought she had long buried within the pages of her books and scripts. Does Elle go for the man who first owned her heart or does she go for the one who's made it come to life?

Red Carpet Kiss is a standalone contemporary romance from Melissa Brown about a bestselling author turned nominated show runner and screenwriter who is torn between her past and her present and needs to decide on who she wants to spend her future with. I love that the characters in this book are in their mid-thirties because there are times I find myself reading one new adult (NA) or young adult (YA) book after another. Of course, they're being mature adults doesn't immediately mean that they aren't prone to making stupid mistakes or choosing to do things that make no sense to readers like us who are left to merely observe and not become actively involved by slapping them upside the head a few times. ^.^

While I certainly didn't agree with several of things that Elle did, I liked the idea that she had the opportunity to either find closure and a new beginning with Luke or a second chance with Troy. When relationships end, there are a lot of what-ifs that you can find yourself contending with, as was the case with Elle. There are love affairs that are meant to finish and then there are those that deserve a second chance. There's a difference between not meaning to hurt someone and purposely hurting them and that's why, while I understood why Troy was terribly hurt by what Elle did to him in Vegas, his treatment of her was reprehensible, especially when you realize that there was a pattern of behavior already established. Had it been a one-time thing then it would have been more acceptable, but this was inexcusable.

This book left me wishing there were more guys in real life like Luke Kingston. Goodness, there was nothing to NOT like about him. The stuff he said and did would make any girl all giddy and I felt that Elle was taking it all for granted, believing he would always be there. Her best friend truly was the voice of reason, but then, even when advice is sought out, there's no requirement for you to take and follow it. Frustrating, isn't it? But yes, Luke was the numero uno reason I enjoyed this read, though the creative touch to the usual Hollywood slash second chance contemporary romance was a close second. ^.^ This was my first Melissa Brown book and am now interested to check out her other books, especially if they're as good as Red Carpet Kiss. This makes for a fun but introspective read and gets 4.5 stars. ♥