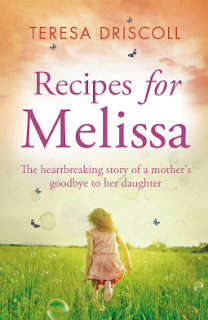 Note: This ARC was provided by Bookouture via NetGalley in exchange for an honest review.

It had been seventeen years…

And now, suddenly, after all the good things in her mother’s book. After the happy memories had been slowly and preciously stirred, it was taking her to a very different place now and she was more confused than ever. No longer just cricket on the beach and happy birthdays and cupcakes and biscuits.

The last thing Melissa Dance expected to receive when she went to the solicitor's office was something from her mother. After all, she passed away from cancer when Melissa was only eight, never giving her daughter the opportunity to say goodbye to her. Now, twenty-five-year-old Melissa has in her possession a notebook with handwritten recipes and stories and she's at a loss as to what exactly to do with it. She hesitates telling her boyfriend Sam Winters or her dad, Max, about the notebook's existence, needing time to wrap her head around the fact that her mother left it and waited seventeen years for her to receive it.

Aside from being confronted by her mother's words from beyond, Melissa is dealing with the aftermath of her rejection of Sam's proposal and needing to make a decision regarding her career as a journalist. She knows Sam is hurt but maybe their time together on holiday will help distract them from the knowledge that their relationship is now somehow caught in limbo. Then there's her father, who appears to be having his own set of epiphanies going on in his life. Amid the pain and sorrow, Melissa recalls the happy memories she once shared with the mother she still misses, and with, uncover her life-changing secret.

Teresa Driscoll's debut novel, Recipes for Melissa, is a beautifully crafted tale of a young woman who is gifted with a notebook left to her by her mother who passed away seventeen years ago. Her reaction upon receiving it and as she begins to read it is something I didn't expect, piquing my curiosity and making me wonder why someone wouldn't jump at the opportunity to read something a parent or loved one left behind right away. Melissa Dance is certainly a complex character and one who I empathized with but also felt a fair amount of frustration towards. With the flashbacks, which were when her mother Eleanor was writing down the recipes and sharing stories, it felt as if I was on the journey with Melissa as she tried to remember what life was like when her mother was still alive. It was both quite bittersweet and touching.

Aside from reading about Melissa and her life and the amazingly understanding Samuel "Sam" Winters, readers get more than snippets about Maximillian "Max" Dance's own life. We get to see how his wife Eleanor could see how he was trying to deal with her cancer diagnosis in the flashbacks and how he's trying to move forward with his life today. He may have years of life experience, but it's easy to relate to his hesitation about what to do with his "crush" on Anna Merrivale, especially since he hasn't felt the way he has in a very long time, loving no other woman than his late wife. I liked how he was portrayed as someone of importance in the academe yet was always going to be a father who worried about his daughter, no matter what age she may be. Reading about him was just as interesting as reading about Melissa and Sam.

I'm fortunate to still have my parents with me and that our conversations can be from the most mundane exchanges to swapping silly stories and jokes to tackling more difficult issues, whether personal or otherwise. It isn't always easy, though. I'm not someone who's automatically comfortable sharing what I think or feel with my parents even though I'm no longer a child. Writing has always been my preferred form of expression, so I could relate to Eleanor's use of a notebook and filling it with recipes that were connected to memories she shared with Melissa. This book made me miss my maternal grandparents, whom I called Lolo and Lola, but instead of leaving their grandchildren with a notebook filled with words, they left us photographs, many of which I keep in a special box and others that I have in picture frames.

I've been fortunate enough to read a lot of really good books this first half of the year and then there are those extra special ones that not only tug at your heart but leave a lasting memory. Recipes for Melissa definitely falls under the second category and so you shouldn't be surprised that I'm now highly recommending you check it out. If you're looking for an exceptional book to read this weekend, one that's about a woman re-discovering the mother she lost and has now found again, thanks to a notebook filled with recipes and memories, and how she's able to make better sense of her own life because of little nuggets of wisdom from her mother, then this is the book for you. Teresa Driscoll is an author who has made her presence felt in the publishing world with this debut. Recipes for Melissa gets five-plus stars. ♥