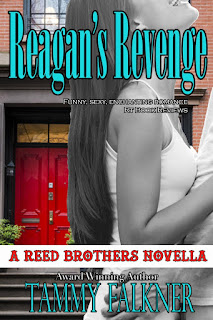 Emily Madison loves Logan Reed and the feeling is very much mutual, but Emily's been feeling different for a short while. Logan's not sure what exactly is going on with Emily, but he believes that they'll be able to face it together, no matter what. Then Emily shocks the hell out of him when she says it may be time to put an end to their long engagement.

Reagan Caster and Pete Reed's relationship is as strong as ever, a relationship based on love, trust, and respect. They've been to their forms of hell and back, respectively, and are now working together to help each other and help those working their way out of their own hell. Then the time comes for Reagan to face her past head on and all bets are off.

Reagan's Revenge and Ending Emily's Engagement is a two-fold novella in Tammy Falkner's well-loved Reed Brothers series, wherein we find Emily and Logan in the precarious situation of deciding whether the time has come for them to finally end their engagement, which began about the same time that Pete ended up in jail. The minute I read the title, I had a feeling why the engagement had to end and that the outcome was actually unsurprisingly inevitable.

I was glad that Reagan was able to finally get her own brand of vengeance when it came to her past and that she was able to do it the way she chose to. I was a bit iffy with the end because it felt like the easy way out. Admittedly, I liked Emily and Logan's story more than I did Reagan and Pete's in this novella, though it really did have more to do with the ending than anything else. Overall, Reagan's Revenge and Ending Emily's Engagement gets 4.5 stars. ♥