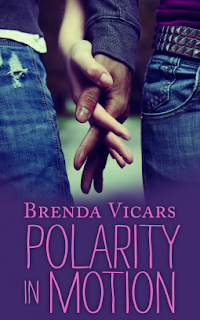 Note: This ebook was provided by Good Tales Book Tours via NetGalley in exchange for an honest review.

He studied me, and I could see layers of understanding and patience in his eyes--as if he had a deeper knowing of the world than I did, but he wasn't holding my ignorance against me. "I guess people don't see their own way of seeing. They don't mean harm by it. They just don't see it."

I said what was in my heart. "I'm glad that all of this happened--not just because of what I've learned but because it gave me you."

Polarity Weeks is the new girl in school, having only been in Star Ninth Grade Center for about four weeks, and she's had her fair share of being bullied by some of the other students. When a nude photo of her begins to circulate in the school, Polarity is immediately pulled out of class and finds herself in the principal's office and is questioned about her knowledge of the photo. Polarity is shocked and has no clue who would do such a thing, but with her parents being the main suspects, she is taken away from them.

Even as she insists she didn't knowingly pose for the photo, Polarity knows that the only people who believe she's innocent are her grandmother, her grandmother's boyfriend, and Ethan Rawls, a friend from Star. Ethan is doing his own investigating, knowing that getting to the bottom of who posted the photo will help prove Polarity's innocence. In the days and weeks that follow, Polarity learns more about her parents, Ethan, her own surroundings and the many people within it, and, most importantly, herself.

Polarity in Motion by Brenda Vicars is one of those books that will stay with you even after you're done reading it. It's a beautifully written tale about one fifteen-year-old girl and the unexpected journey of discovery that she finds herself on after a nude photo of hers makes its rounds online. No one ever said being a teenager was easy and I'm pretty sure bullying isn't something that only started a decade or two ago. Sadly, bullying is something that's been around for far longer, but with social media being as popular as it is, bullying has surpassed a level I never thought possible. People can be cruel, especially the anonymous haters and bullies on the internet that make it their life's purpose to spew viciousness. I mean, how do you fight back, right? That's what was so inspiring about this book--this young girl made herself fight back by asking questions, demanding answers, and not allowing what happened to her beat her down, because then, that would simply be handing over the power to the bullies and allowing them to win.

Polarity is only fifteen but she has a maturity about her that may have stemmed from having to manage her mother's borderline bipolar disorder. She cried over the whole nude photo scandal but she bounced back and the support she received from Ethan and her grandmother buoyed her spirits. Even as her own parents seemed to believe that she did pose for the photo, they refused to have school authorities treat her as if she were a criminal. The way her parents handled everything showcased how different they were and I loved her father's quiet but strong presence because he didn't need to announce to the world what he was doing to help his daughter--he simply did. It reminded of my own father. ^.^ And of course, Polarity and Ethan's love story was sweet and their mutual need to protect one another is something that you wish you would see in more people their age. These two were young but they knew the difference between what was right and wrong and they decided that taking a stand was something that simply needed to be done.

There's a point in the story where Polarity suddenly notices that the black students have their own table, away from the white students, and that there are indeed more black kids placed in safe houses and in the alternative school known as Beauty compared to white kids. Then, she realizes that she's heard racist comments before but simply went on her way and did nothing about them. Maybe it was her developing friendship with Ethan that makes her finally see that it's time she says something about it and to put others on notice that it isn't okay to say disparaging things about other people, even if it's supposedly done without malice or hate. Let's face it, racist comments are racist because there is malice and hate and the excuse that it's already part of one's vocabulary underlines how sad it is that we allow these things to seep into our everyday utterances. If there's a book a need to highly recommend to teen readers out there, it would have to be Polarity in Motion by Brenda Vicars. It's a gem of a book and gets five-plus stars. ♥