Review: One Night with the Cowboy by Eve Gaddy (Whiskey River #2) 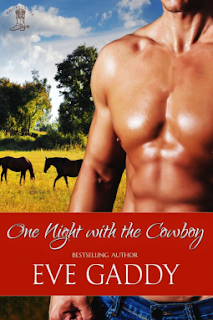 Trey Kelly still can't believe that his late father hid the fact that he had two other sons from an extramarital affair and that now they have no other choice but to live and work together for a year if they intend to get their share of the inheritance left to them. The one thing that Trey isn't willing for anyone else to lay claim to is Kelly's Champs, the horse breeding and training business that he put together on his own. With everything going on with his brothers, Trey thinks it's time to finally move his business to his own land, and he's got his heart set on the one where the Parker ranch sits. Except he's got competition...

Ariana Wright's life changed after she survived a car accident with her ex-fiancé but the scar on her face and the fact that her ex ended things with her because she was "maimed" has made her into a recluse in Whiskey River. After trying to save an injured dog and ending up spraining her own ankle and wrist, Ariana is rescued by none other than her childhood crush--Trey Kelly. She's unsure if he's being nice because he wants to seduce her into letting go of the land they both want, but when she realizes he truly is one of the good guys, she finds herself wondering if this cowboy could be the one to make her fall again.

One Night with the Cowboy by Eve Gaddy is the second book in the Whiskey River series and is about the eldest of Boots Kelly's sons, Trey, and Trey's childhood acquaintance, Ariana Wright. This doesn't really fall under the friends to lovers trope because Trey and Ariana were never really close friends when they were children, although they know each other to a certain degree. Trey is the poster boy for the perfect cowboy--he's a gentleman, he's sweet and kind, someone who knows when to have fun but also knows when it's time to get serious. Ariana's engagement ended when her then-fiancé took one look at the scar marring her face and decided she was no longer the woman he wanted to spend the rest of his life with. I loved when Trey told her that he wasn't in love with her face; he was in love with her. Le sigh. Such sweetness and I really did enjoy reading their love story because they did seem well-suited as a couple.

Aside from the romance aspect, getting to know a bit more about Trey's brothers, Wyatt Kelly and Nicholas and Xander Blue, because then you find yourself anticipating the release of the other books in the series and finding out who these guys are going to be paired up with and how their stories will turn out. I was expecting one thing when these four brothers started living under one roof but was surprised by how things played out and whenever I'm caught unaware, it's usually a good thing, as is the case here. I'm looking forward to reading the rest of this series, especially since I was quite entertained with the first two books. They may have both been quick reads but they packed enough of a story and character development to keep my attention from start to finish. If you can only spare an hour or so, check out One Night with the Cowboy. It'll be an hour well spent. I'm giving this second book in the series four stars. ♥

Purchase One Night with a Cowboy on Amazon.