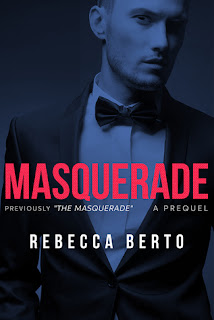 Nineteen-year-old Rick Delaney and fifteen-year-old Vee Wyland have feelings for one another, but Rick is very much aware of the age difference between them and Vee doesn't realize that their feelings are quite mutual. Rick knows he should keep his distance from Vee, but if he does, could someone  swoop in and take the one girl he's ever wanted? Will it be too late for Vee to confess to Rick exactly what she feels?

Masquerade is a prequel novella in the Rebecca Berto series entitled The Rental and introduces readers to the lead characters, Rick Delaney and Genevieve "Vee" Wyland. There's about a four-year age difference between Rick and Vee, something that Rick considers a major obstacle to pursuing anything romantic with her. He's also preoccupied with his younger brother's drug addiction and the fact that he appears to have his own thing for Vee. While four years may not seem like that big of a deal, it does seem exactly like that when you're in your teens, so Rick's hesitance was something easily understood.

This is a very quick read, with the story's text at less than thirty pages, and it does give you enough of an idea of what's going on--Rick and Vee having feelings for one another but neither knowing that it's easily reciprocated. The ending also leaves you curious as to what may have happened and you want to know if everything will tie in once you read the full-length book. I read the books in order and this prequel is available as a free download on a number of e-retailers, so you may want to check it out to see if it'll tickle your fancy. I'm giving Masquerade 3.5 stars out of five. ♥