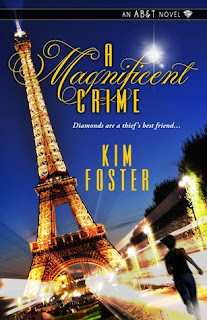 Cat Montgomery is one of the best thieves the Agency of Burglary & Theft has and she always tries to be careful with each job she takes on. When a former mark finds her and demands she steal the infamous Hope Diamond and bring it to him. If she refuses or fails, those closest to her will suffer the consequences. In order to succeed, she's going to need the help of her boyfriend, FBI Agent Jack Barlow, and her colleague, AB&T art thief Ethan Jones, but Jack has a case he's working, one involving an elusive criminal nicknamed the Gargoyle. This will probably be the most difficult job Cat's ever done, what with the world's most famous cursed jewel on loan to the world's most famous museum, the Louvre, but when it becomes clear that her job and Jack's case are connected, "complicated" doesn't even begin to describe their lives.

A Magnificent Crime is the second novel in the AB&T series by Kim Foster and picks up some time after the events of the first novel. Cat Montgomery and Jack Barlow have re-started their relationship and are now living together. Being on opposite sides of the law can be difficult but they'd rather be together than apart. Ethan Jones is another country, needing to get his head on straight after everything that happened with Cat and the still missing Fabergé egg containing the Gifts of the Magi. When Cat has no choice but to go after the Hope Diamond after being threatened by a former mark, she heads to Paris and finds an unexpected ally in Ethan. Jack ends up going to Paris too but for a completely different reason...or maybe not so different, after all.

To say that Cat's life is complex is an understatement. There's no doubt that she's more than good at her job as a thief, but she puts herself in situations that endanger her life and the lives of those closest or have some connection to her. Then, there's the whole situation she finds herself in with Jack and Ethan. She spends more time with Ethan in this sequel compared to amount of time she spent with him previously and you could definitely see that there was, indeed, some chemistry between them. My loyalty, however, remained firmly with Team Jack, not just because of the chemistry but because of the history and far more interesting dynamic between the two. I do get the difficulty, though, of having to choose between the two are multi-layered and it's more than a case of the law-abiding guy versus the law-breaking guy after one girl's heart.

The Gargoyle, the Hope Diamond, and the Fabergé egg made this an even more intense book and the mystery and suspense mixed in with the humor and drama have become trademarks of this series. This was an enjoyable, albeit lengthy, read and you can't help but become invested in the main characters and the love triangle that takes center stage. For anyone looking for a good romantic suspense novel to check out this weekend, A Magnificent Crime may do just the trick. It certainly didn't disappoint me and I'm curious to see as to where Cat's decision in the end of this book will lead to in the third book in the series. This gets four stars. ♥