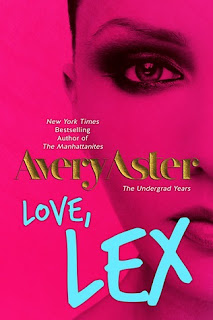 Alexandra "Lex" Easton is just a day away from finally turning eighteen and is more than ready to hand in her V-card. All she needs to do is lose a "bit" more weight, since that's a prerequisite her boyfriend has set if Lex wants him to even entertain the idea of having sex with her. The shocking discovery of her mother and her boyfriend engaging in things she thought he was supposed to be doing with her (once she lost the weight) has struck her speechless. Gathering things that represented memories of their relationship, Lex decides to burn them all to a crisp in the bathtub and then leaves "home" to move in with her best friends.

Of course, when Lex is suddenly placed under arrest for trying to kill her mother, she's dumbfounded. It appears that the little bonfire she started in the bathroom caused an explosion that led to her mother suffering injuries. Now, Lex needs to figure out how to clear her name while sitting in a jail cell with two of her best friends and one on the outside doing what he can. The sudden appearance of the hot motorcycle cop who stopped her as she was supposedly fleeing the scene has her wondering if he's there to help or if he wants her to confess. One thing she does know: this was not how she wanted to celebrate her birthday.

Love, Lex is the first book in The Undergrad Years, the prequel companion series to The Manhattanites, both by Avery Aster. The author generously offered Undressed and Unscrupulous, the two books currently available in The Manhattanites series for me to read and review in August of 2013, so I was already familiar with Alexandra "Lex" Easton and her BFF, Tabitha Adelaide "Taddy" Brill, her GBF, Blake Morgan III, and her VBF, Viveca "Vive" Farnworth. It was fun reading about the four of them as they were seventeen- and eighteen-year-olds, especially Lex, who I felt terribly for as she stumbled upon her mother and boyfriend having very raunchy sex and then getting arrested for attempted murder. Bad luck much?

Lex may be rich and privileged, but she's also going through things that anyone who is or was a teenager can relate to: body issues, parent issues, boyfriend (or girlfriend) issues, and sex issues. We've all had at least one of those as a teen, though Lex appears to have all four dumped on her at one time on the eve of her birthday. She obviously has bad taste when it comes to boyfriends but that doesn't extend NYPD's Officer Ford Alessandro-Vollero-Gotti, who was one of the good things to come out of the whole fiasco. I do feel that things between them escalated really quickly in such a short amount of time, but hey, I know of people who've basically done the same thing in a matter of minutes...and no, I'm not naming names. :P

This was an entertaining read but while it may involve characters who are still teenagers, the story itself is meant for a more mature audience because of the sexual content. It's short enough that you'll be able to get through it in an hour or so and it doesn't end in a cliffhanger. It's the first book in a series but can be read as a standalone, though I always recommend that you read books in the reading order set by the author so that you don't feel as if you're missing out on anything, story- or character-wise. I was able to get this book for free in 2014--yes, I have countless books that I have on my tablet that I bought one or two years ago still waiting to be read--and if you're looking for a laugh, give Love, Lex a try. It gets 3.5 stars. ♥