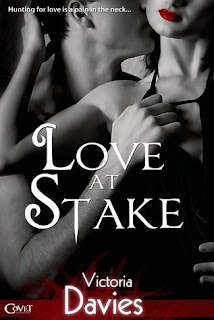 It may seem strange for a human to be working in a matchmaking company whose majority of clients belong to the supernatural realm, but Abbey Sinclair enjoys what she does. Challenged by her boss to sign up vampire socialite Melissa Redgrave to Fated Match, Abbey hesitantly agrees. She's not a fan of vampires and she realizes what she's up against when she meets Melissa's sire and adoptive father, Lucian Redgrave, who doesn't believe that Fated Match is worth Melissa's time or money.

When Lucian suggests that he give the services a trial run to prove his theory to Melissa, Abbey takes him on, ready to show him how wrong he is. But being Lucian's handler is made even more difficult when Abbey realizes how drawn she is to him. As much as Lucian gives a chance to each of the women he's set up with, he can't help but give them all a thumbs down. He knows what he wants and it's none other than Abbey. Is this a temporary thing or can a human and a vampire ever truly be mates?

Love at Stake is the first book in the Fated Match paranormal romance series by Victoria Davies. Abbey Sinclair works at Fated Match, the premiere dating service in the supernatural world, and meets Lucian Redgrave, the father of of a would-be client who is dead set (pun intended) against his daughter joining. Abbey isn't exactly a fan of vampires but there's no denying that there's an attraction between her and the vampire elder. There are definite sparks that go on, especially when Abbey refuses to acknowledge what's going on with her and Lucian. The fact that she's human and he's a vampire complicates things, plus Lucian may be attracted to her but having loved and lost Melissa's mother, a human, he cared for has made him resistant to anything beyond the temporary with Abbey nor does he believe in love.

This was such a lighthearted read, one that I truly enjoyed from start to finish. There was some humor and a bit of drama, plus a host of charming characters, supernatural and otherwise, some of whom I hope will be highlighted in the series with their own love stories, namely Christian Kae and Chloe (whose last name I don't recall being mentioned). I didn't include Melissa since I know that her story is up next in the series. One of the most unique things about this book was the conclusion. When it comes to a story of a human and a supernatural/paranormal being falling for one another, there's an oft used ending but the author did something out of the ordinary and I quite liked that she did! With a number of interesting possible matches to be made, Fated Match is a series worth latching on to. Love at Stake gets 4.5 stars! ♥