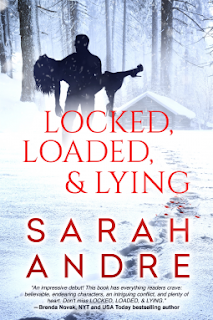 Ten months ago, Locklen Roane was at the top of his game, winning medals in skiing, living the high life, and being with his heiress girlfriend. Then he woke up to find his girlfriend dead, her blood all over him, and without any memory of what happened after he blacked out. It doesn't help that he was caught on camera having an argument with her the night before she died. Out on bail and with his case being prepared for trial, Lock is shunning his fame by holing up with his twin brother Leo in a secluded cabin.

She's interviewed the man known as Lock and Load in the sports world before, an interview that had him tearing her pad in half, and now Jordan Sinclair needs to find Lock Roane again. Doing so, and getting proof of where he is, will give her access to reward money that she needs in order to get her blackmailing father off her back. But the Lock she finds is nothing like the man she interviewed once before, and if she was certain of his guilt before, she can't help but wonder if he is innocent and is being framed for murder.

Locked, Loaded, & Lying is a standalone romantic suspense novel from Sarah Andre and was a highly entertaining read. I'm one of those people who usually has to, at the very least, like both the lead characters in order for me to truly be into the book I'm reading. And the thing is, I really didn't find much to like about Jordan Sinclair, seeing her as someone who was more than willing to use Lock Roane in order to save her own ass from her father. I get it. She was doing what she felt needed to be done to spare herself and, most especially, her mother the hell that her father was promising to rain down on them. Desperate times call for desperate measures and all that, and that would have been understandable in the beginning. However, time and again, she could have changed her mind but she waffling. Surprisingly, though, my reading experience wasn't as affected as I thought it would be. Yes, I didn't particularly like Jordan for most of the story, but this book had me hooked from start to finish because it was simply just that good.

One of the best things about this story was that it was difficult to come up with one suspect and not end up questioning that choice. I never even considered Lock being guilty of killing his girlfriend, and I loved that, in spite of her faults, he was firm in the feelings he had for her and made it clear that she was so much more than the party girl she was made out to be in the media. I was going back and forth with my list of suspects, wondering what their motives would be for the murder and the resulting frame-up. This is what happens when a story is so well-crafted that the mystery truly lasts until the real killer is revealed by the author. And yes, I did like that Jordan was trying to help Lock by going through the elements of his case and that she was finally doing it because she thought he was innocent and not simply because she was trying to get him to talk long enough to get her photo and put together an article on him. The more sincere she was in her true pursuit to get to the truth for Lock, the more my undeniable dislike for her diminished.

Lock and Leo were definitely my two favorite characters in the book and their relationship was immensely captivating because you could tell that there was a heck of a back story involving this pair of twins. Even with the disappointment and doubt, though I honestly didn't think Leo every truly doubted Lock's innocence, they were brothers who would lay down their lives for one another. That's one more thing I liked about this book--the underlying love for family. And may I just say that I absolutely appreciated the route the story took, what with a female lead character who's motives for getting close to the male lead were often suspect and how things played out in the book, especially in the last two chapters. There was nothing formulaic about it all, meaning the story and characters weren't what you'd find in your typical romance novel, so kudos to Sarah Andre for her inspiring creativity and more than laudable writing skills. Locked, Loaded, & Lying is a debut novel so worth reading, people, so pre-order it! This gets five stars. ♥