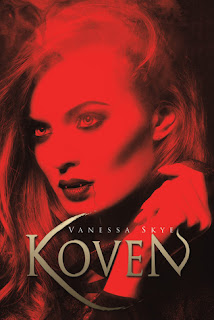 Note: This ARC was provided by The Writers Coffee Shop in exchange for an honest review.


Striker has seen and encountered more than his fair share of warriors in his centuries-long life, but none have come as close to capturing and holding his attention and fascination as Celeste. Her prowess in taking down rogue vampires has nothing to do with being a female, since she's proven herself to be at a level rarely seen in males who have and continue to battle Koven's enemies. The fact that she's beautiful is simply an add-on to Striker's need to have her become part of Koven.

Celeste never wanted to be a vampire but she was never really given the option to refuse. She's gotten her revenge on the one who kidnapped and created her, but she's not done seeking vengeance. She wants the head of those who were part of Kovenant, a breakaway group of vampires with plans of global domination. Agreeing to be part of Koven may help her get closer to those she seeks, but the closer she gets to Striker, the more questions he has, questions that, once answered, may destroy their fragile relationship.

Koven is the first novel in the new paranormal series from author Vanessa Skye and creates an interesting world wherein vampires are not the evil creatures that have made some pact with the devil in order to become immortal but are actually the way they are because of a virus, making them physically stronger and having longer lives than regular humans. There's also a hierarchy within vampire society, and as is the case with societies that have stratification, not everyone is thrilled with the idea that there are those who are given varying degrees of power while countless others do not have any at all. Here, there is Kouncil, vampires that yield the most power because of their being the elders in their world, and Koven, vampire warriors that are able to protect their world from rogue vampires that were created without the consent of and do not adhere to rules set by Kouncil. So, while it is a vampire society, it's one that brings with it an air of familiarity to readers because it's similar to the society we live in or have read about.

I'm a fan of female lead characters who are not only able to hold their own with their male counterparts but can often surpass other males in a story. Celeste is one such heroine, never allowing her past to make her feel like anything less than what she truly was: someone who didn't merely survive but a woman who endured and persevered and made it to the other side with her head held high. In a society like theirs were females were often seen as never at par with males, Celeste was a vampire who commanded rather than demanded attention. Though she's experienced a great deal, both as a human and a vampire, she's never felt love or desire until she meets Striker, and, in a change of pace, it is he who gives her a bit of vulnerability.

There are a few twists in the story and I was able to guess the secret she was keeping from Striker as well as who it was in Koven who was actually a member of Kovenant. And while I was happy that I figured those out correctly, the story was so absorbing that it didn't really matter as much that I was right because knowing didn't really take away from the fast-paced story. There's a lot of intrigue and mystery in this novel but don't doubt that there's enough of a love story to satisfy paranormal romance readers. I enjoyed every bit of this book, and while it does end in a cliffhanger (gah, these evil cliffhangers!), with Vanessa Skye's brand of writing, you know the wait will be worth it until the second book comes out. Aside from adding it to my list of 2015 favorite reads, I'm highly recommending Koven and giving it five stars. ♥