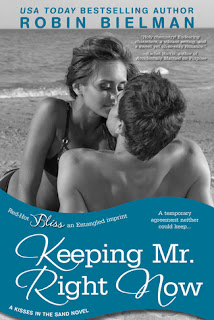 Champion professional surfer Zane Hollander wants to use his fame for something that will leave a more lasting legacy and becoming the ambassador of the Surf Help Exchange or SHE, a non-profit organization that advocated some of the things he wholeheartedly believed in and supported. The one thing that could possibly stand in his way is his reputation, especially when it came to the opposite sex. His best friends and agents suggest that he spend time with a woman who isn't like the beach bunnies who vie for his attention in order to tame his image. No one's more perfect for the job than the beautiful and brainy Sophie Birch.

Both Zane and Sophie know the parameters of their agreement, but Zane has never wanted to be around a woman more than he wants to be with her and Sophie's crush on him is reaching seismic levels. They've only got a few days to spend together but they've already changed each other's lives, giving each other the confidence to believe that they're so much more than what people see or expect from either of them. When their time together is up, will they end up going their separate ways or will they be able to realize that what they have right now may be just the beginning of what they could have for the rest of their lives?

Keeping Mr. Right Now is book one in the Kisses in the Sand series by bestselling author Robin Bielman and I'm going to assume that all the books are set in White Strand Cove based on the first two books I've read. This first book has Zane Hollander, a professional surfer who's ranked number one in the world and has a huge fan base, and Sophie Birch, an event organizer from Montana brought in to take charge of the local film festival that includes a documentary starring Zane. With Zane being somewhat of a playboy and Sophie having had only two short-term boyfriends, you would think these two would be somewhat awkward as a couple but nope! They were cute and sweet and I loved that they took the time to get to know each other and shared experiences that they've never shared with anyone else. Definitely squee-worthy!

Zane and Sophie were successful individuals but both had certain insecurities that you wouldn't think people like them would have. They brought the best out of each other and the trust and respect was there even before they ended up in bed together. They also showed the importance of family and true friends and how these are the ones who will be by their side to support and accept them wholeheartedly. I'm a sucker for a story that brings together love for the person you fall for, love for family, and love for friends and this book has all three in spades. The story was well-paced and the cast of characters were irresistible, leaving you wanting to read the stories of Zane's two best friends and Sophie's new bestie. Keeping Mr. Right Now is a fab summer read whether you're enjoying the sand and surf or staying home. Five stars! ♥