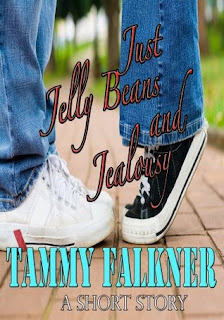 Lacey's ready to give a kiss to whomever can guess the number of jelly beans inside a pickle jar, the proceeds of which are going to a good cause. Unfortunately, all her best friend Sean can think of is someone else claiming the lips he's wanted for so long. He may be ready to cross the threshold between friendship and something more, but Lacey's made it clear that she's not ready to risk what they have. Just when Lacey appears to have changed her mind, is it a case of a too little, too late with Sean now giving up?

Just Jelly Beans and Jealousy is a short story in the Reed Brothers series by Tammy Falkner, numbering about twenty pages or so. Based on the reading order on the author's website, this falls in between books three and four, where there are two other short stories/novellas, but Goodreads has this listed as belonging between books two and three. I went with the latter simply because I did read it after book two and I didn't feel as if I was missing anything, especially since this is more of a companion read but does include Logan (who met Sean at NYU), Emily, Friday (Lacey's roommate), and the rest of the Reed boys.

This is a really quick read but one that had me grinning by the end, especially after what the Reeds did to help Sean out. The humor that's associated with the series is still very much there and even though the story does circle around two new characters, it's one that's worth the read. It's short and sweet and is available on e-retailers, at least the three I regularly check, for free, so if you're a fan of the series, this is a win-win situation because it really is a rather entertaining short story and one that's being gifted to you by Tammy Falkner. Do yourselves a favor and download Just Jelly Beans and Jealousy. It gets 4.5 stars. ♥